It is not hard to guess why the Champagne region is famous, since the world's most celebrated party drink is loved the world over and many visitors like to see where champagne is produced. But as you will discover there is much more to the Champagne-Ardenne region than a bottle of bubbly! 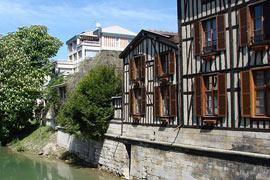 The Champagne-Ardenne region is situated in north-east of France along the French border with Belgium. Picardy and Paris are to the west, Burgundy to the south and Alsace-Lorraine to the east. The capital of the region is Chalons-en-Champagne in the Marne department.

Despite the repeated invasions and conflicts that have affected this region across the centuries you will discover many historic towns, monuments and cathedrals, small traditional villages, and large areas of countryside that appear to have changed little across the years, as well as the famous wine chateaux of Champagne...

There are four departments that together make up the Champagne-Ardenne region: from north to south these are Ardennes, Marne, Aube and Haute-Marne. Below we explore the principal highlights of each department (Marne is the centre of champagne production).

The prefecture town for the Ardennes is at Charleville-Mezières and has the impressive Palace Ducal as its most important monument.

In the quiet countryside to the west of here we also suggest you visit the village of Parfondeval, centred around a 16th century fortified church and listed as one of the 'most beautiful villages in France'. You will come across several other traditional fortified churches if you spend time exploring this area, known as Thierache.

There are numerous imposing castles and historical monuments to enjoy across the Champagne-Ardenne region and it is here in the Ardennes at Sedan that you can visit what is claimed to be the 'largest castle in Europe', and the abbey and village at Montherme are also interesting to explore.

Continue north from here and on the frontier with Belgium you can visit Givet, a quiet town on a meander in the river and overlooked by the the Charlemont Fort, and make a detour to see the small town of Vireux-Molhain.

First stop for champagne enthusiasts will surely be Epernay in the Marne department. This is the centre of the champagne world, and the perfect place to visit the chateaux and cellars where it is produced and sip champagne to your hearts content.

A short distance north of Epernay a town that we particularly recommend you visit is Reims which has several important monuments that are listed together as a UNESCO world heritage site including the cathedral, the Palace of Tau and Reims basilica, and there is also an important Museum of Fine Arts.

The local tourist authorities suggest several driving tours that explore the vineyards and chateaux of the region around Reims and Epernay and in the villages south-east of Troyes - be sure to ask for details in a tourist office close to you when you visit Champagne.

Further south-west we enjoyed a stroll around the small village of Outines which has several half-timbered buildings including houses and a church, making the village seem more like one you might expect to discover in Alsace.

Another noteworthy town to visit in the Marne is Chalons-en-Champagne with its important 12th century cathedral and collegiale church among the places of interest, followed perhaps by a detour to see the 15th century gothic style Basilica of Notre-Dame at Epine.

To the south-west of the Marne at Sezanne the principal highlight is the Church of Saint-Denis. For several hundred years the church had various artisan workshops trading around its edges between the main church supports...

...Unfortunately they continually tried to increase the size of their premises by removing parts of the walls until the church itself was put at risk, so now only the Office de Tourism is allowed to follow this tradition.

The Marne also had the misfortune to be at the centre of some of the most terrible trench warfare battles in the First World War. Visitors interested in following this history can follow the "Circuit 1914-1918: la Grande Guerre dans la Marne", a signed driving circuit that starts at Mondement to the south of Reims then travels north to Dormans before travelling across the Marne towards the east, visiting many of the infamous battlefields and the related museums and memorials.

Our favourite town in Aube is surely the lovely medieval town of Troyes in the centre of the department.

Troyes also has the advantage of being just outside the Regional Natural Park of the Forest of the Orient, which has many trails to explore through the lakes and forests that make up the park. A particularly pretty village within the park is Piney, with a traditional medieval market hall and half-timbered houses.

Among the historical monuments of interest in the department we suggest a visit to the Chateau de Motte-Tilly, a 17th century classical style castle on the banks of the Seine river in the north-east of the department.

An interesting architectural feature of the region can be seen in the villages between Troyes and Saint-Dizier (in Haute-Marne), where there are about 10 half-timbered churches typically built from the 16th and 17th centuries and which are both interesting and attractive.

The capital of the Haute-Marne is the town of Chaumont which has several buildings of interest in its historic centre, principal among them the 13th century Basilica of Saint-John the Baptist.

A walk around the original ancient ramparts of the town is the main highlight of your visit to Langres, another of the most important towns in the Haute-Marne department.

In the countryside to the north of the department garden enthusiasts will want to visit Joinville to see both the 'Chateau du Grand Jardin' and the nearby 'Jardin de Mon Moulin', both officially listed as 'remarkable gardens' of France. In Joinville itself be sure to see the church with its intricate spire.

You will also enjoy exploring the peaceful, unspoiled villages in the southern part of the region.

Six unmissable highlights of a visit to Champagne-Ardenne

No visit would be complete without a trip to the renowned cathedral and palace at Reims.
See Reims

The heart of Troyes contains an intriguing mix of renaissance and medieval architecture.
See Troyes

The ramparts in Langres date back up to 2000 years and are more than three kilometres long!
See Langres

Map of Champagne-Ardenne and places nearby