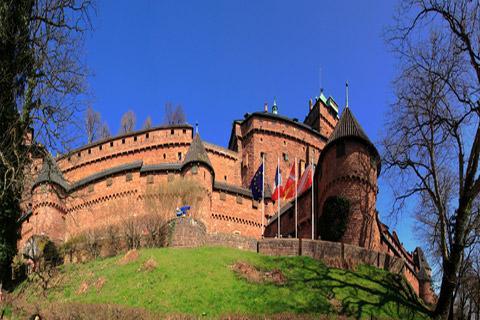 Chateau Haut-Koenigsbourg is a castle situated on a hilltop near Kintzheim and just west of Sélestat in Alsace (in the commune of Orschwiller). The castle is one of the most visited sites in Alsace, and in France, both for the castle itself and the far-reaching views.

It was as early as the 12th century that a castle first stood here, because the location was easy to defend and also gave a clear view across important trade routes that passed through Alsace in the valley below. 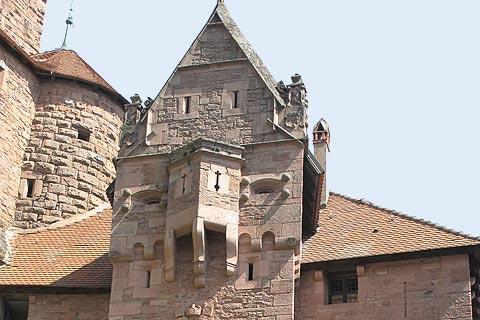 The original castle was largely destroyed in 1462, to be rebuilt at the end of the 15th century with more substantial defences. This castle was to survive more than 100 years before being destroyed around 1633 after the 30 years war.

The castle ruins remained unchanged during 200 years of neglect, and it was these ruins that were presented to Kaiser Wilhem II at the end of the 19th century, after Alsace was reincorporated into Germany following the Franco-Prussian War of 1870.

Kaiser Wilhem then spent the first 10 years of the 20th century restoring the castle. As a result much of the substantial castle you see today is an early 20th century renovation of the castle, based on what it was thought to have originally looked like but using incomplete information - there is much debate about how authentic the castle really is).

Don't let possible historical inaccuracies deter you from visiting, each stage in the history of the castle at Haut-Koenigsbourg has played its role in the building you can now visit and the castle is very interesting, both for the insight into what a medieval castle was like and for the subsequent renovation work.

During a vist to Chateau du Haut-Koenigsbourg you will first see the defensive ramparts and towers in the walls that surround the structure. Before entering take a look at the ornate stonework above the entrance door.

Having crossed the drawbridge to enter the castle you can see the main living accommodation, the substantial keep, a deep well (crucial for a besieged castle), the kitchens, and an interior courtyard. Among the most impressive features is the windmill in one corner of the courtyard.

From the lower courtyard a stone staircase and drawbridge give access to the living accommodation. In the internal courtyard you can see a raised balcony with painted walls and a pretty stone tower with a staircase.

Within the rooms you can see the salle des fetes, with a large eagle symbolic eagle painted on the ceiling which owes more to Kaiser Wilhelm's imagination than a medieval recreation.There are also various other rooms and halls, and a wide selection of objects and furnishings covering a wide historical period, and many medieval weapons. 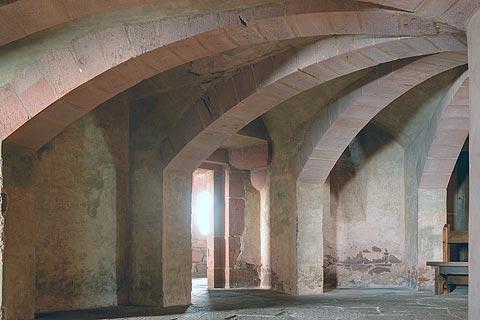 Outside the castle there is also a recreation of a typical medieval garden. The high position of the castle on a rocky outcrop also mean it has some of the best views to be found in Alsace.

There are numerous pretty villages and ancient castles in Alsace close to the Chateau de Haut-Koenigsbourg, as well as the famous vineyards and scenery of the region. See the Alsace Wine route guide for more information.

See more castles in France. You can find more travel ideas in the Bas-Rhin guide and the Alsace guide.

Map of Chateau du Haut-Koenigsbourg and places nearby

Visit near Chateau du Haut-Koenigsbourg with France This Way reviews