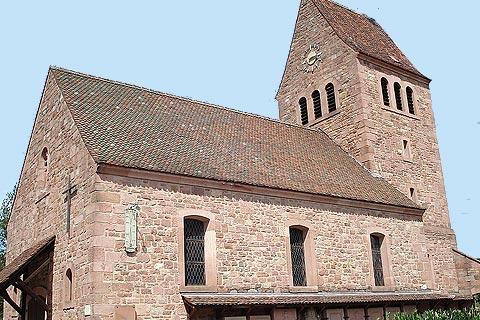 Kintzheim is a village in the Bas-Rhin department of the Alsace region, close to the Chateau Haut-Koenigsburg and south-west of Selestat.

Although it is slightly less visited than some of the better known villages along the popular Alsace Wine Route a stop in this picturesque wine producing village is recommended. In fact it is quite likely you will come across Kintzheim when you visit one of the popular 'animal attractions' nearby (see below). If so, make sure you allow time for a stroll through the village itself!

There are a good number of typical Alsacian half-timbered houses to admire, mostly along the main street through the centre, that also has cafes and shops to distract you - the town has a more lived-in feel than some of the small Alsace villages.

There are also some churches of interest here, such as the 19th century Church of Saint-Martin, built to replace a smaller church in the same location that had become too small for the community.

Other buildings of interest in Kintzheim include the small chapel on Rue Clog-Stebler and the baroque style town hall, both built towards the end of the 19th century.

Attractions in the vicinity of Kintzheim

There are several interesting attractions nearby that merit a visit, focussing on wildlife:

1) The ruins of the abandoned chateau de Kintzheim - it was destroyed in 1632 - are small but perfectly formed, and now also play host to an aviary and an extraordinary selection of birds of prey such as eagles, falcons and vultures. You can see displays at the castle featuring the birds and the castle itself is in a very picturesque setting of wooded hills above the village.

2) Another popular attraction close to Kintzheim is the 'Mountain of Monkeys' (Montagne des Singes) where more than 200 Barbary monkeys can be seen living in a natural woodland habitat.

3) There is also a third park called Cigoland and dedicated to storks, the bird that is the symbol of Alsace. As well as learning about storks your children will enjoy the theme park here.

One interesting site just outside the village is the tiny Chapel de l'Aigle a little way out of the town, in a pretty setting in the selestat forests. Several people claimed to have visions of the Virgin Mary at the chapel during the 19th century.

There are many other picturesque villages along the Alsace Wine Route not far from Kintzheim that you can visit during the same trip.

Map of Kintzheim and places nearby

Visit near Kintzheim with France This Way reviews

Plan your visit to Kintzheim, Bas-Rhin

The French version of this page is at Kintzheim (Francais)