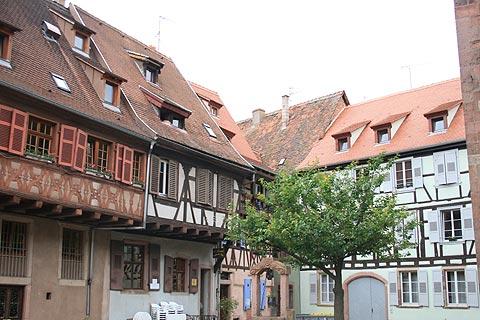 The town of Selestat is in the Bas-Rhin department of the Alsace region, north of Colmar and south of Strasbourg. It is slightly less visited than many of the towns and villages in the region but there are several interesting sites and monuments waiting to be discovered in this lively town if you are passing

Start your visit perhaps on the bridge across the Ill river, which is well placed to discover the old town. The centre of Selestat revolves around its two main churches: the romanesque style Church of Sainte-Foy and the gothic style Church of Saint Georges (which has some interesting stained glass windows).

There are also a few streets containing attractive traditional Alsace buildings, for example along the Quai des Tanneurs and around the Place du Marché aux Pots, and a scattering of grand old houses and historical monuments including a clock tower, a 'Chateau d'Eau' which has a very 'Moorish' look, and an old gateway into the town. 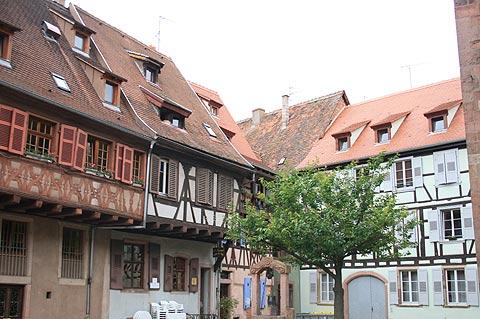 An interesting aspect of Selestat is the way you can see examples of monuments that cover the town's 1000 years of history:

- Among the oldest buildings, the Witches tower and Quai des Tanneurs date back to the early Middle Ages. The witches tower was a part of the original town fortifications and, as the name suggests was also used as a prison for those charged with witchcraft.

- The roman style Church of Saint Foy was built in the 12th century. The church is built in red stone and has two towers on the facade and a lantern tower above the transept - this layout is quite common in Alsace. Note that most of the decorative stone carvings around the doorways and in the capital stones and the internal furnishings are much more recent with most added towards the end of the 19th century.

- The gothic style Saint-Georges Church dates from the 12-15th centuries and has an imposing entrance with statues of the Saints, a balcony and a rose window. Inside, the stained glass windows in the choir are among the highlights. As with the Church of Saint Foy the majority of the statues and carvings are a 19th century addition.

- The Clock Tower and Franciscan church were built in Selestat during the 14th century. The clocktower with its four mini towers near the top is visible from many places in the town and stands above an ancient gateway into the town. 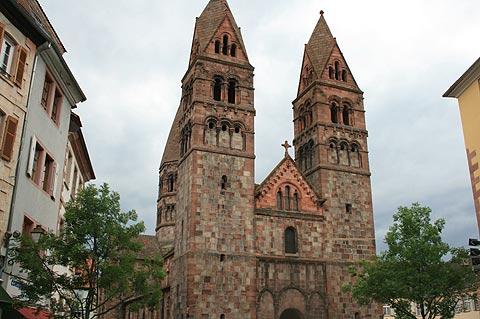 - The buildings of the Commanderie Saint-Jean, now home to the Selestat Tourist Office, were built in the 15th and 16th centuries, as was the 'Hotel d'Ebersmunster'. The buildings from this renaissance period have particularly ornate doorways.

- Moving forward to the 17th century, the ramparts, Porte de Strasbourg and the renaissance style Billex house were built. The Rue des Clefs, mansions and the neo-classical style Town Hall were added a century later, in 1788.

- In the 19th century the Wheat Hall and synagogue were built, and then the water tower in the last 100 years.

Perhaps Selestat's most important building is its famous Humanist Library which contains a very important collection of 450 manuscripts and 2000 16th century prints (situated in the Wheat Hall). Part of the building is an exhibition of books dating back to the 7th century, while the library is also an important research centre for old books that attracts visitors from all over France. 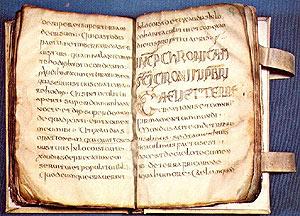 Selestat forms part of the popular 'Alsace Route des Vins' with numerous villages and scenic highlights to enjoy, and Castle Haut-Koenigsbourg is another popular attraction nearby.

Map of Selestat and places nearby

Visit near Selestat with France This Way reviews

Plan your visit to Selestat, Bas-Rhin

Regular market(s) are held in Selestat each Tuesday & Saturday. (Markets are held in the morning unless stated.)

The French version of this page is at Selestat (Francais)