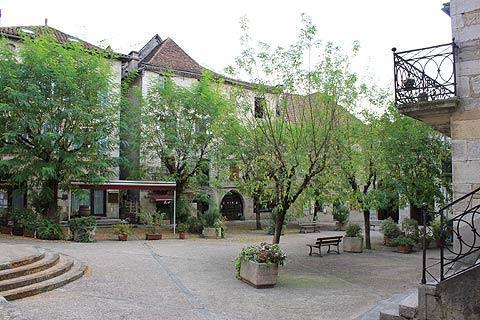 The small town of Cajarc is in the heart of the Lot Valley, a very scenic stretch of river between Figeac and Cahors as it passes through the Regional Natural Parc of the Causses de Quercy.

The site of the town has been occupied since the roman period, with the fortified village we now see dating from the 12th century onwards when the town prospered due to its port on the river.

The historic centre of Cajarc is enclosed by wide boulevards which are in the position of the original defensive walls of the town. 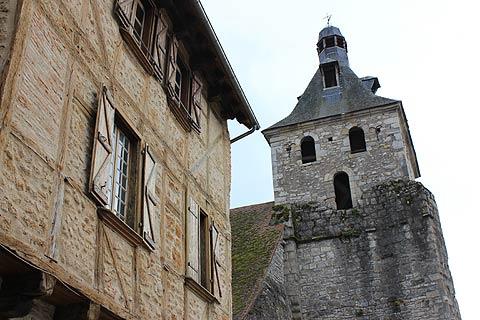 The centre contains a good number of interesting medieval buildings. Narrow alleys to the sides of the main streets provide glimpses of a town unchanged with the centuries, while part of the original 13th century castle can still be seen in the main street through the centre.

In the centre of Cajarc, the Place de l'église is a particularly picturesque small square with shady trees and several historical buildings around the edges, including a 13th century church.

Among the buildings of particular interest are the Maison des Consuls, a substantial 15th century town house, and a roman style house nearby dating from the 12th century. Many other historic buildings in Cajarc centre have small signs explaining their history and date of construction, adding interest to a visit.

The weekly market in Cajarc is held on saturday afternoons.

On the edge of the town the Lot River is crossed by a 19th century suspension bridge (which replaced a medieval stone bridge destroyed during the Wars of religion) and has a large 'plan d'eau' - a section of the river where boating and other activities are popular.

Extending for several kilometres along the river, it is the largest area of this type in the Midi-Pyrenees. There are also some medieval buildings along the river front. 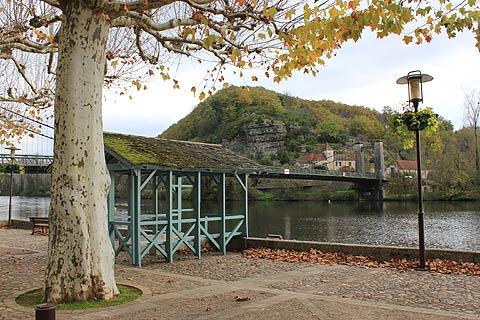 You will discover Cajarc as you explore the Lot Valley. You can see the Caougne Waterfall close by, and the imposing Chateau Cénevières is a short distance downstream. A short distance upstream at the Saut de la Mounine you can have one of the best views in the region.

The broad river valley is very scenic with cliffs, wooded slopes, and several very picturesque villages often in dramatic hilltop locations such as Montbrun and Calvignac. Saint-Cirq-Lapopie is a particularly beautiful village, to the west of Cajarc and listed as one of the most beautiful villages in France.

Map of Cajarc and places nearby

Visit near Cajarc with France This Way reviews

Plan your visit to Cajarc, Lot

The French version of this page is at Cajarc (Francais)