A few kilometres south of Figeac, the village of Capdenac falls in two parts - Capdenac Gare and Capdenac-le-Haut. It is the second of these, on a hill overlooking the Lot Valley and the town of Figeac, that is most interesting to visitors and is now listed as one of the 'most beautiful villages of France'.

France This Way comment: it is true that Capdenac is very small and quickly explored, but it is pretty and interesting so we suggest you make a detour here when you are nearby.

For such a small village there is a surprising amount to see and appreciate in Capdenac. Start your visit by parking just below the village walls and looking at the view across Figeac and Capdenac-Gare, and the large meander in the Lot river below the village. 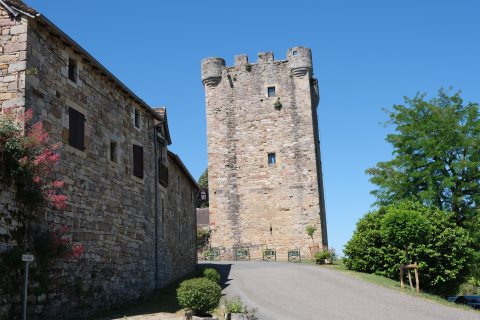 Strolling up the hill passed the remains of ancient village ramparts take the road to the right which passes the large square tower, called the 'Tour de Modon'. This donjon was built in the 14th century and is where you can find a small tourist information centre for the village and a museum.

Slightly hidden up a flight of stairs just behind the tower there is a small medieval garden that overlooks the centre of the village and Capdenac church. The Church of Saint-Jean the Baptist looks ancient but was actually built in the 18th century (1727 is engraved above one of the windows), and has a small statue of Saint-John the Baptist in in a niche above the classical style doorway.

The main village of Capdenac is spread out in front of you from here. To the right you can see the small church, and beyond that there is a belvedere with lovely views overlooking a wide meander in the Lot Valley. Straight ahead of you is the town hall (also in an attractive building), and behind that there is a small warren of picturesque medieval streets to explore.

As part of the ramparts in the village you can also see two of the original fortified gateways into Capdenac.

Behind these streets you abruptly reach a cliff and a flight of steps that lead steeply down to a fountain called the 'Fontaine des Anglais'. This water source is divided between two basins of water, and has origins dating back 2000 years to the ancient roman era.

Having access to a water source was of course a key requirement to ancient villages trying to resist when under siege, and this source was especially essential when Capdenac was besieged by the English during the Hundred Years War.

Note: there is a closed door part of the way down the staircase that needs a code from Capdenac tourist office to open ad gain access to the fontaine.

There are numerous highlights in the region around Capdenac including picturesque villages and towns, castles and the scenery of the Lot Valley.

Enthusiasts of beautiful villages will want to visit Cardaillac, another 'most beautiful village of France', while the town of Figeac is one of the most impressive medieval towns in south-west France.

Map of Capdenac and places nearby

Visit near Capdenac with France This Way reviews

Plan your visit to Capdenac, Lot

The French version of this page is at Capdenac (Francais)