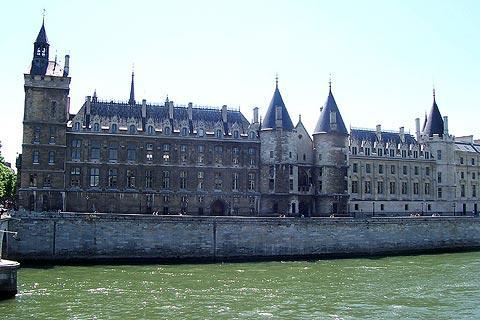 The Conciergerie, on the Ile-de-la-Cité in the heart of Paris, is a very large gothic palace that for several centuries was the main palace for French Kings, as well as being used as a prison and centre for justice.

France This Way comment: although there is perhaps less to see here than in some of the monuments you will visit in Paris, the chance to see the grand gothic hall and the prison cell of Marie-Antoinette, the important role the palace played in French history, and the fact that a reduced price ticket also allows access to Sainte-Chapelle, make a visit recommended.

History of the Conciergerie

A palace has stood here since the 4th century, when the Roman Emperor Julian the Apostate first established a home here. By the beginning of the 6th century it had passed to Clovis, who established the first French monarchy with hereditary rights. From the end of the 10th century and with the arrival of Hugues Capet as the first Capetian King, it became the home of French Kings until the 14th century when Charles V had the Louvre built.

From this time onwards the Conciergerie had a new role as a seat for parliament, a centre of justice and as a prison. 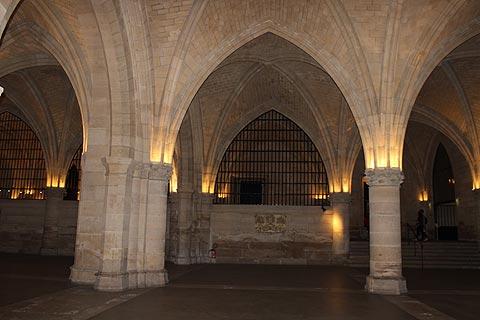 In fact the Conciergerie was known as being one of the most brutal prisons in France, with torture and execution taking place on a large scale. It was also the prison where both Marie-Antoinette and Robespierre (the revolutionary) were found guilty and sentenced to death.

The Conciergerie is easy to find: the Ile de la Cité is the island in the Seine river in the heart of Paris that has the Cathedral of Notre-Dame at its east end and the Conciergerie and Sainte-Chapelle at the west end.

Before going inside take a look at the three towers on the river facing side of the Conciergerie. The clock on the square tower at the corner is the oldest public clock in Paris.

- The gothic halls, built in the 14th century, are the Salle des Gens d'Armes and the much smaller Salle des Gardes. The first of these is the largest gothic hall in Europe and has retained its extensive columns and vaulted ceiling, as well as the enormous fireplaces once used to heat the room.

- The chapel to commemorate Marie-Antoinette was added in 1815 in the room that was originally her cell. Close by you can also see an exact replica of her original cell. 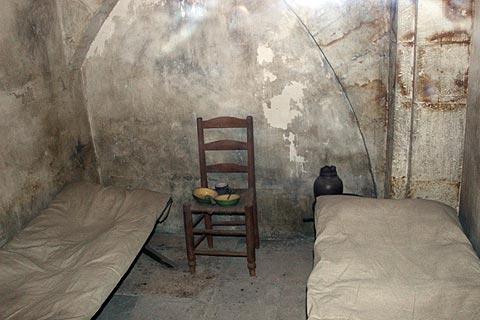 - Between the two rooms related to Marie-Antoinette, the Cour des Femmes is interesting because it retains the original water fountain where the prisoners washed their clothes, the cells and dining tables, and the place where they said their final goodbyes (in groups of 12) before being taken away to be executed.

Map of Conciergerie and places nearby

Visit near Conciergerie with France This Way reviews