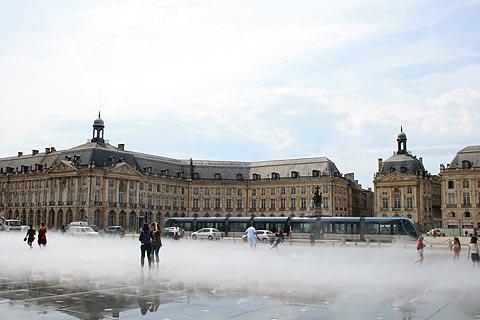 The Gironde department of Aquitaine in south-west France has much to offer the visitor from the grand city of Bordeaux to the largest sand dune in Europe, and from 'classical' coastal resorts like Arcachon to the famous wines of the Medoc and Saint-Emilion vineyards.

The department of Gironde is situated in north-west Aquitaine, in south-west France. When planning your visit the department can perhaps best be considered as falling into four distinct separate regions:

It is perfectly possible to stay in Bordeaux for a few days and to explore the surrounding regions from the city, although it will be necessary to hire a car to make the most of your visit.

The highlight of the region is perhaps Bordeaux itself, which has a great deal of 18th century architecture, an attractive river front area, the longest shopping street in France, museums and galleries to explore.

This 'city of culture' is now listed as a 'UNESCO world heritage site' and has a new efficient public transport system* and has changed almost beyond recognition in recent years. It is rapidly becoming one of the most interesting and attractive cities in France, and one of our personal favourites that we have visited many times.

* There is also an efficient 'park and ride' system in Bordeaux so you can park in one of the special P&R car parks around the edge of the city and get the bus in - much more fun than driving in a city centre!

The coast of Gironde, the northern part of the 120 kilometres of sandy beaches of the Cote d'Argent, is to the west of Bordeaux.

The most important town here is Arcachon, a charming turn of the century seaside resort with an interesting variety of architecture and access to some very well known attractions such as the Dune de Pilat, the largest sand dune in Europe. The western part of Arcachon includes the popular seaside resort of Le Moulleau. Further round the Bassin d'Arcachon is Andernos-les-Bains which is home to the largest pier in France and the charming oyster villages of Canon and L' Herbe. Cap Ferret at the tip is a popular resort.

The Dune du Pilat is the most visited tourist destination in Gironde, with more than one million visitors each year!

To both the north and south of Arcachon you have easy access to the Atlantic coast which extends for over 120 kilometres and is almost one continuous sandy beach backed by large dunes. Along the coast there are numerous attractive resorts including the well known resort of Lacanau.

At the northern end of the Cote d'Argent region you can visit the resort at Soulac-sur-Mer, one of the few resorts here to have developed around a historic town and where you can see the 12th century abbey-church.

Other popular towns and resorts along the coast in Gironde include Carcans, Hourtin and Montalivet, Andernos, and others along the Cap-Ferret peninsula. The small towns of Lesparre-Medoc and Saint-Vivien-de-Medoc are also in this region.

Lakes and forests behind the beaches...

Just inland from the coast in Gironde and easily accessible if you are staying in one of the resorts, there are a series of lakes formed by the water 'trapped' behind the sand dunes. These include the lakes of Hourtin-Carcans, Lacanau, Parentis, Aureilhan and Cazaux. Leisure industries have developed around these lakes, based on sailing and lake beaches (which avoid the dramatic waves of the Atlantic beaches).

The Dune de Pilat is at the northern end of the great forest of the Landes, the largest forest in Europe and also home to the Natural Regional Park of Landes and Gascony, that follows the Leyre river south-east from Arcachon.

This forest extends south through the Gironde department and offers many opportunities for walking, cycling etc while canoeing is also popular on the Leyre itself.

There is a great deal for wine enthusiasts to enjoy in this region, with many of the most famous wines in the world coming from vineyards within 50 miles of Bordeaux. Many people visit the region with the sole purpose of visiting the wine chateaux and restocking their cellars!

The Bordeaux region 'hall of fame' of vineyards includes Medoc, Bordeaux Superieur, Fronsac, Saint-Emilion, Pomerol, Margaux and Entre-Deux-Mers among others, with the Bergerac region immediately to the east.

Note that these are wine regions, and there are typically many individual chateaux that are part of any wine region.

You don't have to just visit the most famous vineyards, and there are literally hundreds of individual wine chateaux to be visited. The most important wine towns have a 'Maison du Vin' presenting the wines of the area, and the local tourist offices have lots of information about the wine chateaux and their opening hours.

The two most poular wine areas with visitors are the Medoc peninsula and Saint-Emilion.

The Medoc wine industry in Gironde, with several very famous wine chateaux, is based around Margaux (which also has a Maison du Vin information centre) and Pauillac.

Running along the eastern edge of the Medoc peninsula you can follow the Route des Chateaux du Medoc...and sample the local wine of course. If names such as Petrus, Margaux and Chateau Lafite-Rothschild interest you there are many fine wine chateaux that you will enjoy visiting in the region.

In between sampling the wines we suggest you also visit the village of Vertheuil with its abbey and castle.

East of Bordeaux a particularly lovely town can be seen at Saint-Emilion, a beautiful historical town (listed as a UNESCO World heritage Site), running up the hill and looking out across the Gironde vineyards, with a very great reputation for its wine.

Because of how nice the town of Saint-Emilion is, if you only have time for one day out from Bordeaux to explore the local vineyards I would highly recommend you come here. The towns on the Medoc are pleasant enough but nothing like Saint-Emilion.

Although the east and south-east Gironde are less visited than the other areas in the department there are some places of interest to explore when nearby or when passing through the department.

These include the historical centre of Libourne (close to saint-Emilion) and, further east, a visit to the bastide town at Sainte-Foy-la-Grande.

To reach Sainte-Foy-la-Grande from the west we suggest you follow the scenic road along the southern edge of the Dordogne river that leads to Pessac, stopping at Eynesse along the way, rather than the much larger road to the north of the river.

South of here, you can see another traditional 13th century bastide town at Monsegur, perhaps pausing en-route to visit the Abbey of Saint-Ferme at Pellegrue.

Other suggested places to visit in this region include the historic town of La Reole (our favourite town in the region) and the bastide town at Sauveterre-de-Guyenne. These towns are in the valley of the river Dropt which continues into Lot-et-Garonne to the east - see Dropt valley for details. Further south you can visit the cathedral at Bazas.

Castles and abbeys in south-east Gironde

Although there are more castles to be seen to the east of here in the Dordogne department, there are several historic monuments of interest in this area:

Map of Gironde and places nearby

See an index of all Gironde communes