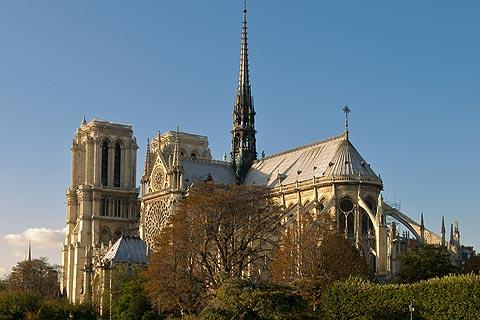 The Cathedral of Notre Dame de Paris is one of the most iconic examples of architecture in France and the most famous of the French cathedrals. One of the first Gothic cathedrals ever built, it lies on the east side of the Île de la Cité, an island in the River Seine in the heart of Paris. The Towers of the cathedral are a listed National Monument.

Start your visit along with thousands of visitors in the large square in front of the cathedral, called the Place du Parvis Notre-Dame. Originally this square was known as the Place du Paradis but the name changed with its prononciation across the centuries.

Building the Cathedral of Notre Dame

It was in 1160 that the decision to build Notre Dame was made, shortly after the Paris church became the central church for all kings of Europe. Bishop Maurice de Sully deemed it crucial that a newer, grander cathedral be built, and the old church on the same location was demolished.

Three years later construction on Notre Dame began and even Pope Alexander III attended the ceremony where they laid the first cornerstone. Construction of the cathedral took almost 200 years, almost as long as the entire gothic period, and most would agree it is one of the most important examples of the Gothic style in the world. 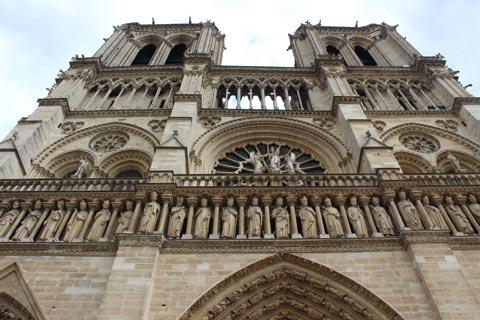 In architectural history, the cathedral of Notre Dame was one of the first buildings that made use of the flying buttress. These buttresses are the arches along the side of a church, supporting the weight of the walls and roof, and allowing the walls they supported to have large sections cut out of them to allow expansive windows.

Although the buttresses were not originally part of the building plan, they proved to be necessary to make the building work and are now a crucial part of the cathedral’s look, and a key feature of other gothic cathedrals.

History of the cathedral of Notre Dame

As a building that has been around for almost 1000 years, Notre Dame has experienced quite a lot of damage and vandalism:

Excavations over the years have discovered that the area surrounding and beneath the cathedral also holds a great deal of history, with hidden rooms and cellars, furnaces, and other secrets. 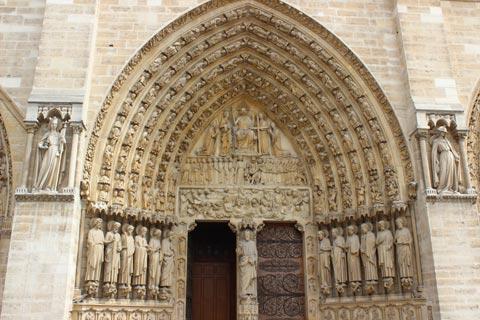 Much of your visit will consist of simply strolling around the Parvis square and walking around the outside of the cathedral. The facade is of course one of the most important parts of the building and notable for its symmetrical structure, its large towers and rose window, the statues of 28 statues of the Kings of Israel in a row across the middle of the facade and the stonework around the entrances. There are three of these portals:

There are two separate queues to enter Notre-Dame: the one to the front is to enter the main cathedral while a separate queue to the left of the facade is for access to the Cathedral Towers.

The first thing you will notice when you enter is the great size of the cathedral and the layout, with the side aisles curving to meet behind the altar: this was quite original at the time although often copied later. 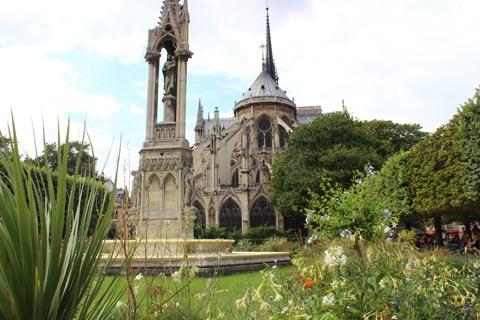 In particular you will want to see the 14th century carvings from the life of Christ in the choir area and the three rose windows. Unfortunately most of the original stained glass windows were removed in the 18th century but these rose windows are magnificent and provide some compensation for the missing glass.

After admiring the interior of Notre Dame cathedral you can visit the towers, the most exciting part of your visit because of the famous bells and gargoyles and the views across the Paris rooftops. Also the most exhausting because you have to climb more than 200 steps to enjoy this splendour.

Map of Notre Dame cathedral and places nearby

Visit near Notre Dame cathedral with France This Way reviews