The 13th century Sainte-Chapelle is one of the most extraordinary sights in Paris and a remarkable achievement of gothic architecture with almost all the upper chapel walls replaced by stained glass windows.

France This Way comment: if possible try and visit Sainte-Chapelle when it is sunny or quite bright outside so that you can see the stained glass windows to their full advantage.

The chapel was built between 1242 and 1248 for King Louis IX to a design by architect Pierre de Montreuil. It was built to hold two important relics that the King had bought from the Emperor of Constantinople: a piece of the True Cross and the Crown of Thorns. 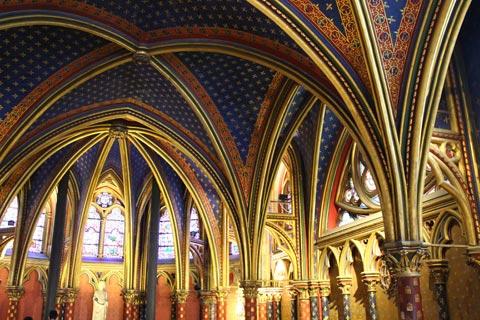 We might now be sceptical about the origins of the religious relics we see in churches, but it is interesting to note that the Crown of Thorns cost Louis IX three times as much to buy as it cost him to build Sainte-Chapelle, so we can assume that he genuinely believed it was genuine.

Sainte-Chapelle is next door to the Conciergerie, at the eastern end of the Ile de la Cité (the island in the Seine where you can also see Notre Dame de Paris).

The chapel is almost impossible to see from the street without entering but the entrance is clearly marked and the queues to get in will help you find it! (In fact there are two separate queues to get in: the first is a security check and the second is a queue to buy tickets.)

Once inside Sainte-Chapelle, first take a look around the lower chapel which was originally used by the servants while the Royal court used the upper chapel. The decorative features, painted walls and brightly decorated ceiling make this chapel very attractive, and worth visiting in its own right. Although the chapel was redecorated in the 19th century it is thought that the colours are similar to the original medieval colours.

Then take the narrow staircase in the corner that climbs to the first floor where the main chapel with the famous stained glass windows can be seen. It is hard to describe the visual spectacle of seeing so many stained glass windows all around you - in total there are 15 windows each 15 metres high depicting 1,113 biblical stories. Photos can't do justice to the chapel, but be assured it is a very impressive sight! The majority of them are still the original 13th century windows, and most relate stories from the Old Testament. 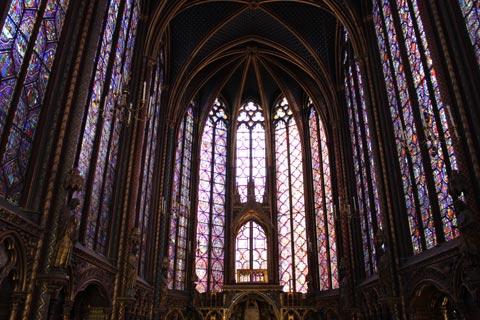 It isn't practical here for us to deal with all 1,1113 scenes (detailed information is available in the chapel for each window) and to examine each one closely would take weeks, so heer we just mention which story is related in each window, from left to right as you enter the chapel.

Be aware that the stories in the windows are read from left to right and starting at the bottom except for the last window (the history of the relics of the Passion) which is ordered bottom to top but alternate rows are read in alternating directions.

The rose window behind you the Apocalypse of John and the return if Christ in Glory are represented. The extraordinary sight of the windows could almost make you overlook the statues of the 12 apostles, one in front of each of the main panels of glass, but these are also very notable works of art.

Note that you can buy a ticket that allows access to both Sainte-Chapelle and the Conciergerie for a lower price than buying the tickets separately.

Map of Sainte-Chapelle and places nearby

Visit near Sainte-Chapelle with France This Way reviews