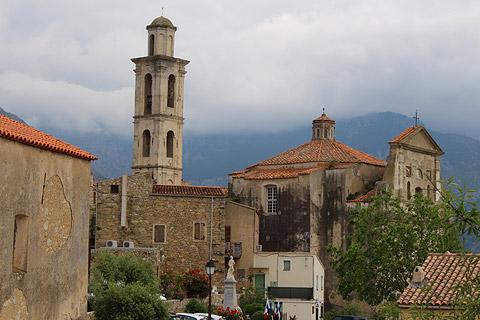 Montemaggiore is a village in the Balagne region of north-west Corsica. Although it is only a small village, it has preserved a great deal of its historical charm and has impressive views across the region so a visit is recommended as part of your tour of the Balagne.

The view of Montemaggiore as you approach the village is one of the highlights - it appears very small compared to the dramatic scenery around the village, which includes the Monte Grosso mountain, and is perched on a ledge overlooking the valleys to the west. 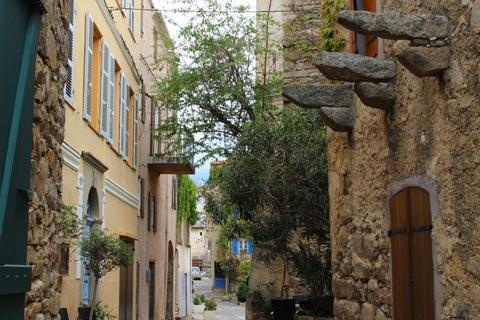 Inside the village you discover narrow streets of stone houses as well as the main square in the village. As you explore the narrow streets you will see various doorways surrounded by their original stone sculptures.

The principal monument in Montemaggiore is the large Church of Saint-Augustin. This baroque style church was built in the 18th century in an imposing position on the edge of the village, with its tower towards the rear. It is true that the church facade could benefit from some renovation, but the faded stone suits the village very well! The Church of Saint-Augustin is also noteworthy for having the largest dome of any church in Corsica. 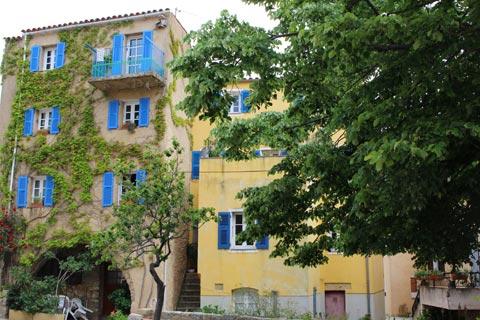 Note that Montemaggiore is actually part of the village called Montegrosso, which also includes the neighbouring villages of Lunghignano to the north and Cassano to the east.

A short distance north of the village you can visit the lovely Church of Saint-Rainier (San Raineru). This church was built in the 12th century in the Pisan roman style with alternating areas of white rock and grey rock. The facade is very plain but near the to you can see a small cross in the stone with two stone carvings of heads.

Montemaggiore is on the D151 road, a popular route with tourists through the western Balagne that also passes through the villages of Pigna and Calenzana and close to Sant'Antonino.

Map of Montemaggiore and places nearby

Visit near Montemaggiore with France This Way reviews

Plan your visit to Montemaggiore, Haute-Corse

The French version of this page is at Montemaggiore (Francais)