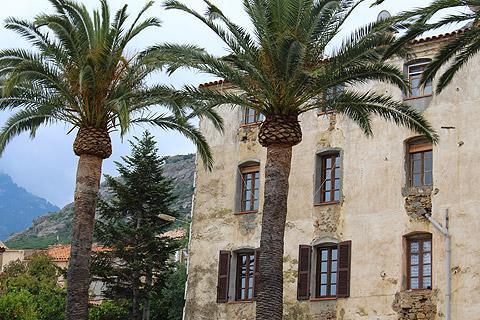 Calenzana is a small town east of Calvi overlooked by the Monte Grosso mountain. It is a very traditional Corsican town with a few sights of particular interest.

The principal monuments in the town centre are close together and next to the main car park. Start with a stroll around the streets of the centre: some of the houses are in rather poor condition but they have lots of character, enhanced by glimpses of the mountain behind the town. 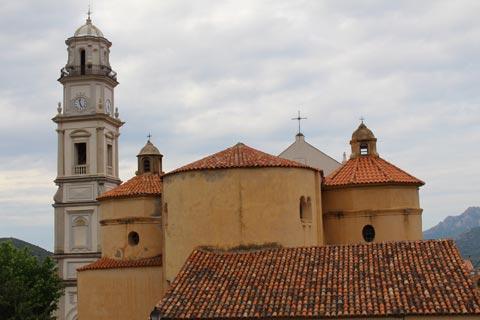 The Church of Saint-Blaise dominates the centre of Calenzana. Built on the site of a more ancient church in the 17th century, it is in the baroque style. Among the notable characteristics of the church: it is very unusual in Corsica to see a church with three naves and also the belltower (rebuilt in the 19th century) is separate from the main church building.

Take a moment to look at the belltower and you will notice a plaque commemorating 500 Germans who are buried here in the square following the Battle of Calenzana in 1732. The Germans had been hired by the Genoese as part of the fight against Corsican independence and sent to fight with the patriots in Calenzana.

The Corsican rebels discovered the imminent attack and prepared a trap which lured the Germans into the centre of the village before they were surrounded and killed, many by things thrown off the roofs of the surrounding houses. 600 Germans arrived but only 100 of them lived to tell the tale.

The most interesting historic site in Calenzana is perhaps the Church of Saint-Restitude, about two kilometres north of the village along the D151 (direction Zilia). The church was originally built in the 11th century in the roman style but was extended and altered many times over the following centuries, but in the crypt and behind the altar there are still traces of the original church.

It is thought that Saint-Restitude was martyred nearby in the 4th century and buried here - at that time the place was called Olmia and the area around the church is an ancient burial ground.

It is still the grounds of the church that are the highlight because there are several extremely ancient olive trees here. These are up to two metres across and apparently up to 800 years old. At one time Corsica had many of these ancient olive plantations but most have been lost to fire or development over the centuries so it is a rare treat to see so many in one place.

On the 21 May each year many pilgrims come to Calenzana to celebrate the fete of Saint-Restitude. 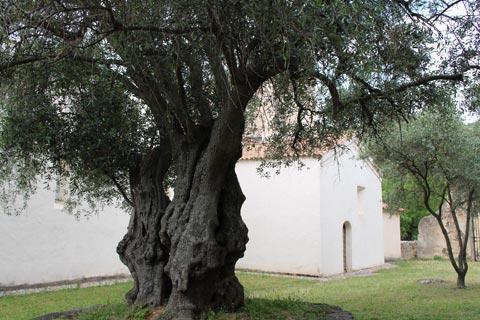 Most visitors will come to Calenzana as an excursion from either Calvi or l'Ile-Rousse, on the coast west of here. Both of thes beach resorts are worth a visit.

In the countryside north of Calenzana you can visit many of the popular Balagne villages either by following the route through Sant'Antonino and Pigna, or the route passed Speloncato and Belgodère.

Map of Calenzana and places nearby

Visit near Calenzana with France This Way reviews

Plan your visit to Calenzana, Haute-Corse

The French version of this page is at Calenzana (Francais)