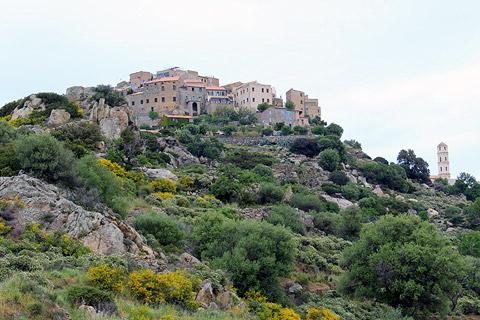 Sant'Antonino is a village in the Corsican hills between Calvi and L'Ile Rousse. It is listed as one of the 'most beautiful villages of France'. The well preserved village sits perched on top of a granite hill and is surrounded by the beautiful Balagne countryside of olive trees and vineyards (the Balagne region of north-west Corsica is often referred to as the garden of Corsica).

As with almost all of the villages in the Balagne region, one of the highlights in Sant'Antonino is the view as you approach the village, with the ancient houses spread along a hilltop.

Cars are not permitted into the village itself - as the oldest village in Corsica, dating from the 9th century, little provision was made for motor cars when the original village developed! However there is a large car park next to the church just below the village so parking is not usually difficult. 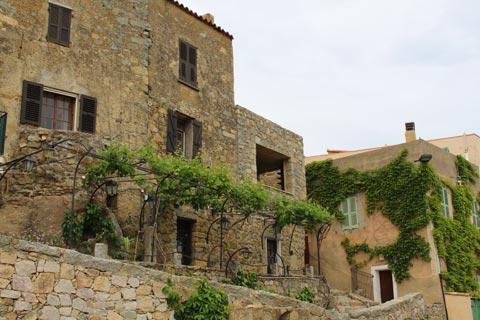 The Church of the Annonciation is here on the edge of Sant'Antonino and dates from the 11th century. The church, greatly modified over the centuries including the addition of a belltower and with little to suggest its ancient origins, contains four notable paintings from the 17th and 18th centuries. Behind the church you can see the Chapel de Confrérie.

From here you can now follow a path that leads up into the historic village. Numerous ancient houses, with their appearance unchanged with the passage of the centuries, border the maze of narrow cobbled streets in the village. As you pass through vaulted passageways and up steep cobbled staircases you almost have the impression that you have stepped back 500 years in time.

Among the small highlights are an ancient bread oven and two small chapels: the Chapel Sainte-Anne et des Bergers low in the village and the Chapel Notre-Dame de Lavasina on a small square higher in the village with a recently restored facade.

From the highest point in Sant'Antonino there are magnificent views, both towards the sea and the mountains. You can also see the vestiges of the fortified building that once stood there, built around the 9th century.

Unusually for a perched village there is also a cafe right at the top of the hill in Sant'Antonino, with an open terrace on the roof where you can enjoy a coffee with views to the mountains in all directions. Very impressive!

Elsewhere in Sant'Antonino you will find various small shops and restaurants, including several with terraces with amazing views. Overall though there is less 'tourist activity' than you might expect in what is said to be the 'most beautiful village in Corsica' and which receives a large number of visitors each year. 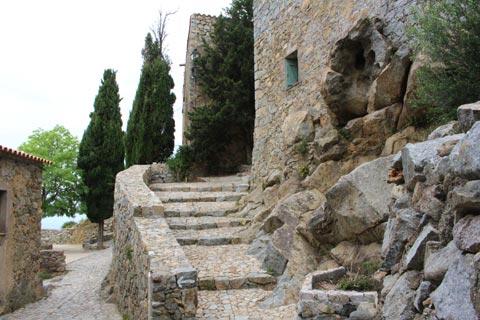 Below the village close to Aregno you should visit the lovely Church of the Trinity and Saint-Giovanni. This church was built in the 11th century in the Pisan style using a mix of light and dark stone and includes many original features and medieval statues (note: this church is just outside Aregno, it is not the church in the centre of the village which is less interesting).

You will most likely be in Sant'Antonino as part of a tour of the Balagne villages. There are lots of small villages in attractive settings here in the hills: among our favourites close by are Pigna and Corbara.

Map of Sant'Antonino and places nearby

Visit near Sant'Antonino with France This Way reviews

Plan your visit to Sant'Antonino, Haute-Corse

The French version of this page is at Sant'Antonino (Francais)