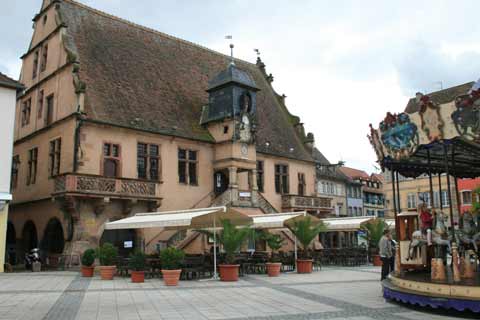 Molsheim is in the Bas-Rhin department of the Alsace region, west of Strasbourg. It is one of the larger towns in the region and a little less crowded with tourists than many of the smaller villages along the wine route.

The historical town centre of Molsheim is quite compact and has several sights of particular interest. Start your visit in the main square in the town centre, which is dominated by a large Renaissance building called 'La Metzig', built in the 16th century and now home to Molsheim tourist office. 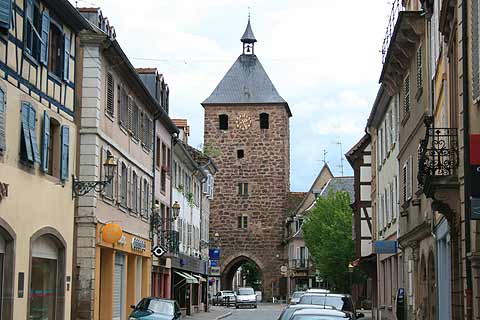 Opposite the Metzig is one of Molsheims original medieval Alsacienne houses now painted a deep rich pink colour. In the town you can still see three of its original medieval gateways that allowed access to the centre. One of these, the Port des Forgerons, is in sight of the Metzig down a side street - although you can't see it now, the gate was originally reached by a drawbridge across a moat.

Another highlight in Molsheim is the Eglise des Jesuits with its decorative tower. note that although the church is essentially in the gothic style, it wasn't built until the 17th century, by which time gothic architecture was no longer usually used for churches. Inside the church music is sometimes played adding to the atmosphere of the building.

Another religious building of interest in Molsheim is the Chapel Notre-Dame. This chapel also borrows from a much earlier style, and the large rose window in the facade helps disguise the fact that the chapel was actually built in the 19th century.

As you stroll around you will see other buildings of interest such as the 19th century town hall, and some picturesque half-timbered buildings. The substantial 16th century building called 'La monnaie' was at one time the mint (stamping coins) for Molsheim.

On the other side of town visit the chartreuse and associated cloisters. The chartreuse monks were forced out of the Strasbourg region by political troubles and settled at Molsheim at the end of the 16th century - this was very unusual because for peace and contemplation the monks preferred the countryside, but due to the political situation they decided to instead settle within the defences of Molsheim town. During a visit you can see the cloisters and some of the monks cells.

The associated priory is now used for the museum the Molsheim Town Museum and the Bugatti Foundation (the main Bugatti museum in Alsace is at Mulhouse). 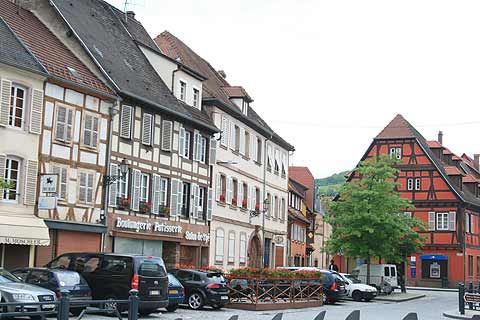 The town is well known nowadays as being home to the Bugatti (sports car) factory. A Bugatti festival is held each September whan many fine examples of the car can be seen - a dream for those of us that will never be able to afford one of these beautiful cars.

Map of Molsheim and places nearby

Visit near Molsheim with France This Way reviews

Plan your visit to Molsheim, Bas-Rhin

Regular market(s) are held in Molsheim each Monday. (Markets are held in the morning unless stated.)

The French version of this page is at Molsheim (Francais)