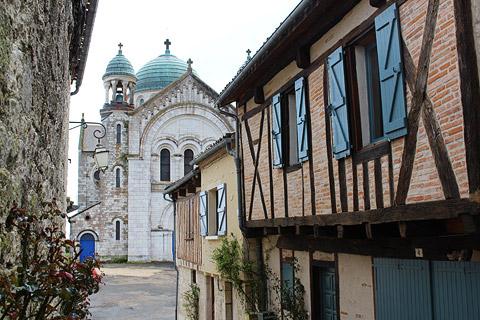 The town of Castelnau-Montratier is in the rolling countryside of the Lot department, to the south of Cahors and in the Quercy Blanc region. It is rather a long way from the main tourist routes of the region but if you visit you will discover a pleasant historic centre, an imposing church and attractive views across the countryside

Towards the north of the centre of Castelnau-Montratier is one of two large squares in the town, next to Rue Blanie and a good place to park the car. There are lots of trees in the square and some attractive houses around the edge. 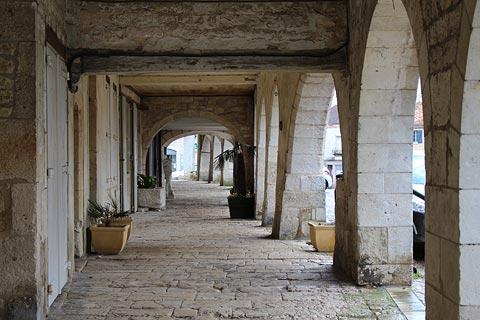 The principal square, Place Gambetta, and the heart of the historic centre is south of here. The main road between the two squares is rather lacking in character but has several shops if you need provisions. It is more interesting to follow Rue Joffre, a smaller road that also passes between the two squares but passes through the historic centre and has several interesting medieval houses.

Here in the main square you can see various medieval houses that have retained their traditional arcades as well as the Town Hall and Castelnau-Montratier Tourist Office. The Town Hall is quite an interesting building that dates from the 14th to 17th centuries and features gothic style arches at ground level and a clocktower above.

You can see our favourite group of medieval houses in Castelnau-Montratier if you take the side street rather than the main road as you continue to the south of the main square towards the Church of Saint-Martin. The Chateau de Castelnau-Montratier, originally built in the 13th century but greatly modified over the following centuries, is also here.

The church is really quite a surprise for such a small town, with its domes and decorative elements. In fact the church is only about 100 years old and the interior is rather uninteresting but it is quite imposing from the outside!* If you walk around the outside of the church you can also appreciate the views across the countryside from the raised platform on which the church has been built.

* At the time of our visit the doors and windows of the church had recently been painted in rather a vibrant blue, quite out of keeping with the surroundings. We politely suggest that they be repainted in the attractive green colour as used in the tiles of the domes! 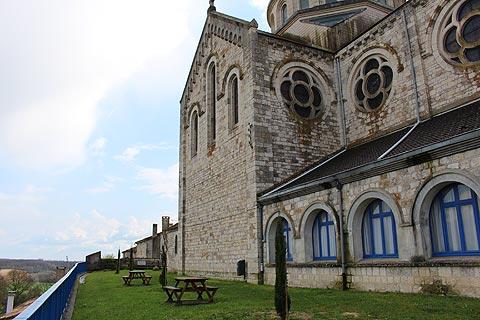 The main weekly market is held here each Sunday, and like many other towns in France Castelnau-Montratier also enjoys an evening market during July and August (each Wednesday), for tourists and locals alike to enjoy freshly prepared local produce in a friendly atmosphere.

We found Castelnau-Montratier tourist office to be helpful with ideas for cycle routes and car routes in the region, as well as being able to suggest several hikes in the surrounding countryside so if you are staying here a few days you should call in and see them.

The villages of Montcuq and Montpezat-de-Quercy are also pleasant for a stroll, while slightly further afield you can visit the pretty village of Lauzerte or travel north to Cahors to see the famous medieval bridge called Pont Valentré.

Map of Castelnau-Montratier and places nearby

Visit near Castelnau-Montratier with France This Way reviews

Plan your visit to Castelnau-Montratier, Lot

The French version of this page is at Castelnau-Montratier (Francais)