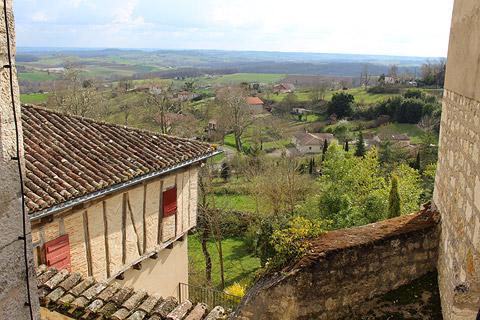 Montpezat-de-Quercy is a small town with some interesting historic buildings in the quiet Lot countryside to the south of Cahors.

When you arrive in Montpezat-de-Quercy you can park just outside the historic town walls, near the Maison du Vin de Quercy. Next to this wine information centre there is a gothic style archway built in the 16th century and called the Porte de la Ville that allows access to the historic centre of the town. Originally there were five of these gateways but unfortunately only one remains today. 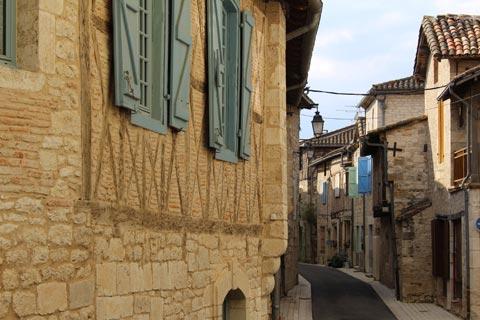 From here you pass along a street with a good number of medieval houses in stone and colombage to reach the central square in the town.

One end of the small square is rather dominated by the 19th century Town Hall, with medieval arcaded buildings on the other sides. Some of these are very interesting, in particular the one to the left of the Town Hall which appears to have upper levels supported by a pile of rocks put in place by a small child - still, it seems to work!

After strolling around the square go along the alley to the left of the town hall to see a nice view across the Lot countryside. You can now follow the signs to reach the most important historic monument in Montpezat-de-Quercy, the collegiale church. The route also follows a street with lots of attractive colombage houses.

The collegial church is an attractive building with a facade that incorporates roman elements and an ornate stone rose window. This style is known as the Southern French Gothic style. It was built in the 14th century by a wealthy local cardinal and the facade remains largely intact except for a part of the belltower that collapsed in the 18th century.

Inside the church the major work is a 16th century series of five Flemish tapestries (unfortunately not on display when we visited) and there are also several other historic works of art. The stalls below the tapestries also date from the 15th century.

If you now follow the road down to the right of the church you have a nice view of the village and countryside: this is called the Chemin des Remparts. 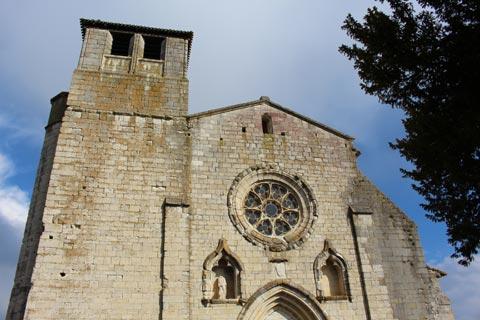 Another village that merits a visit close to Montpezat-de-Quercy is Castelnau-Montratier, to the west of here. If time permits we suggest you also visit the pretty village of Lauzerte to the west and the historic centre of Cahors to the north.

Map of Montpezat-de-Quercy and places nearby

Visit near Montpezat-de-Quercy with France This Way reviews

Plan your visit to Montpezat-de-Quercy, Tarn-et-Garonne

Regular market(s) are held in Montpezat-de-Quercy each Saturday. (Markets are held in the morning unless stated.)