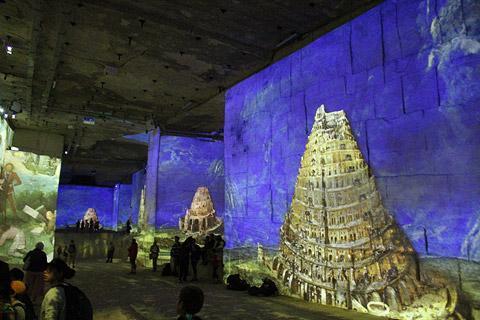 The Carrières de Lumières on the edge of the village of Les Baux-de-Provence is a very popular attraction with visitors, with a different sound and light show presented each year and attracting a very large audience.

For the area around the village of Les Baux-de-Provence and the nearby town of Fontvieille, the 19th century was a time of great activity with large quarries supplying rock for the many buildings being built at that time, both factories and houses. There were several important quarries at that time: the one on the edge of Les Baux was called the Grands Fonds.

In a very imaginative use of what could easily have become an abandoned industrial space, the quarry of the Grands Fonds is now used as the setting for one of the most popular attractions in Provence. 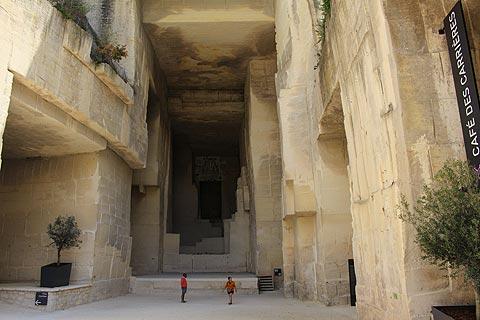 The quarry is a few hundred metres outside the village, along the D27 road that leads to Maillane. Most visitors will also be exploring the village of Les Baux-de-Provence at the same time and you can easily reach the quarry from the village car park, although the quarry also has its own car parks.

As you enter and buy a ticket you can also see a clock telling you what time the next performance begins: each complete performance takes around 30-40 minutes.

You can enter when you like but it is better to start at the beginning. Before you even enter the quarry you can see what a remarkable place it is: the entrance is enormous, like the entrance to some vast underground city or ancient monument. There is also a cafe in this part of the quarry.

The performances in the Carrières de Lumières change each year so there is little point in our explaining the details of a particular year, but every year a multimedia show is produced that combines more or less well known art works with evocative music. Previous artists used have included Michelangelo, Van Gogh, Chagall and Klimt: each year has a different theme.

The general idea is that the artworks are projected on the walls and floor of the quarry all around you, sometimes in their entirety and sometimes small details from paintings expanded to enormous size, while music all around the quarry accompanies the art. During the performance you can stand back and watch the spectacle unfold from one place, or walk around the quarry enjoying the changing views (there is no seating).

France This Way comment: it is quite difficult to describe the event very well, but it is very impressive and we do recommend you go to the Carrieres de Lumieres when you are in this part of Provence: we have been more than once and will certainly go again! 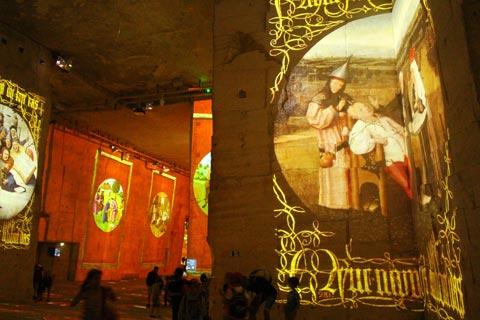 The Carrieres de Lumieres is open all year except February, when the display for the next year is installed. Entrance costs around 13 euros or 18 euros if you buy a "Pass provence" which also gives access to the Chateau of Baux-de-Provence and the Brayer museum in the village: a bit expensive in my opinion but still worth going. Prices are reduced slightly (but not much) for families, children and students.

A short distance beyond the Carrieres de Lumieres there is a lovely viewpoint across the surrounding countryside. You will certainly also want to explore the village and castle of Les Baux-de-Provence while you are here: it is one of the loveliest villages in France.

Plan your visit to Carrières de Lumières in Baux-de-Provence, Bouches-du-Rhone