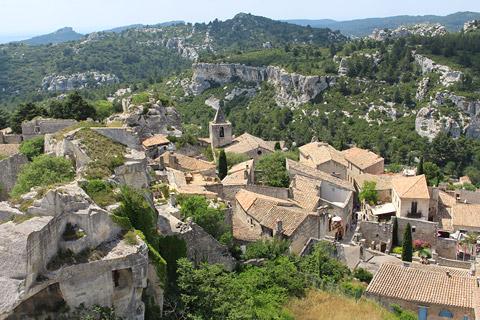 Les Baux-de-Provence is a village 20 kilometres south of Avignon in Provence and within the Regional Natural Park of the Alpilles. Said to be the most visited village in France, apparently two million visitors a year crowd on to the streets of Baux-de-Provence. It is listed among the 'most beautiful villages of France', which will come as no surprise if you have ever visited and certainly deserves the accolade.

The village has a long and colourful history, with traces of occupation dating back some 8000 years. Little is known of the prehistoric occupation but in more recent centuries Baux was the scene of many troubles during the Middle Ages, resulting in Cardinal Richelieu ordering that the castle be demolished as a punishment for harbouring protestant insurgents.

France This Way comment: as well as the village a major highlight of Baux-de-Provence is its great location - nestling in the Alpilles mountains it has great views across the plains that stretch to the south and on to the Mediterranean beyond, as well as the attractive rocky landscape of the Alpilles. There is also a very impressive castle and the Carrières de Lumières to visit, so allow a full day for a visit. 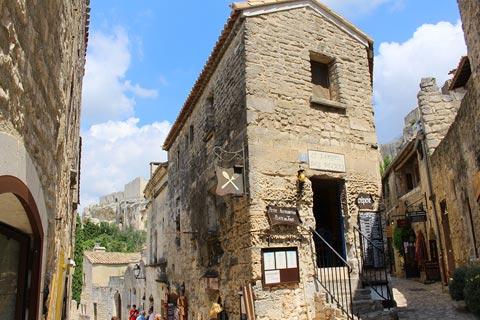 Baux-de-Provence tourist office is just inside the entrance to the village, in a building dating from 1499 and originally the centre for legal affairs in the village, called the King's House. Ask for the plan of the village in the tourist office before exploring. The village that you visit today largely dates from the 15th-16th centuries.

There is plenty to see in the village itself including the parts of the ramparts that are still in place, small chapels and the Porte d'Eyguieres which is the original entrance into the town: it was the only entrance until the second half of the 19th century, and is also the starting point for the path that follows around the outside of the ramparts.

The most important museum in Les Baux-de-Provence is on the right about 100 metres after you enter the village: the Musée des Santons exhibits numerous figurines made in Naples in the 17th and 18th century that represent traditional Provencal costumes and a Christmas crib. The building which contains the museum has had many uses over the centuries, including being the Town Hall for the village for many years.

Although we mention some of the individual historic monuments that you will see in Les Baux-de-Provence, to be honest even if you knew nothing at all about any of them you would still love the village just because of its character and the great viewpoints...still, better to be informed about the history

Continue along the Rue de la Calade passed the Porte d'Eyguieres and after a while you reach the centre of the village, with two small squares, the Church of Saint-Vincent and the Chapel of the Penitents Blancs.

The 12th century Church of Saint-Vincent is in roman style but also has a renaissance extension added in the 17th century and modern stained glass windows installed in 1960. The 17th century chapel contains frescoes added in 1974 and represents a traditional Christmas for the Provençal shepherds. 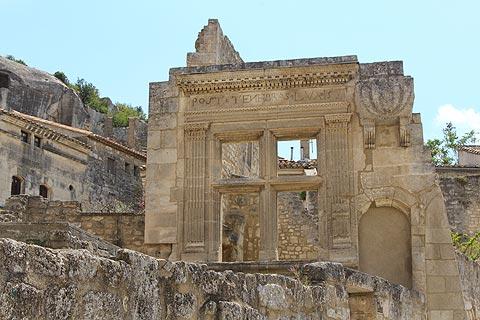 Also here on the Place François de Herain you can see a lovely 16th century town house called the Hôtel de Porcelet with leaded windows: inside you can see a room decorated with 17th century frescoes as well as the Yves Brayer Museum. If you have bought a ticket which allows entry to the Carrieres and the Castle, entrance to this museum is also included in the price.

Along the Rue de l'Eglise and passing the Place Prince Rainier III de Monaco you reach one of the most curious monuments in Les Baux-de-Provence, a large renaissance style window that is all that remains of a 16th century villa, and bears the inscription "Post Tenebras Lux" ("After Darkness, Light"). Opposite you can see the Hotel de Manville, another very impressive 16th century townhouse.

From here you can follow the road that continues towards the castle that stands on the hill above Les Baux-de-Provence.

En route through the village you also pass a couple of attractive viewpoints - the best is perhaps the one from the Place Saint-Vincent next to the Penitents Chapel - although the very best views are from inside the grounds of the castle. You will also see a great deal of cafes and gift shops, an unavoidable consequence of the enormous popularity of the village.

The ruined castle - the Chateau of Baux-de-Provence - sits on top of a rocky outcrop above the village and is one of the most popular attractions in Provence. You don't realise how large the castle grounds are until you enter, but the chateau occupies about seven hectares - it is as large as the village - and there are lots of ruined walls and towers to evoke the history of the place, as well as a small 12th century chapel.

You enter the grounds of the castle compound via the 14th century Tour-de-Brau and explore the ruins of the castle, then relax and enjoy the views that stretch as far as the Mediterranean. There are also a series of recreations of medieval weapons and siege machines that are popular with children.

See the Chateau of Baux-de-Provence for details.

Les Baux-de-Provence also has a couple of other small museums of passing interest. At the entrance to the castle you can visit the Museum of History of Les Baux-de-Provence while the Fondation Louis Jou (in Hotel Brion on Grande Rue) features medieval books and engravings by such illustrious names as Durer and Goya. 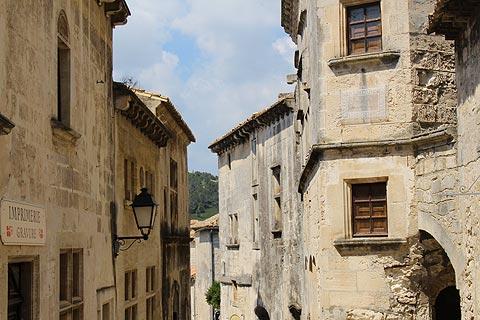 After exploring the village and castle we suggest you follow the road that leaves Baux-de-Provence from the north towards Maillane (it's not far, an easy walk) to reach the Carrieres de Lumiere (also known as the Cathédrale d'Images). The Carrieres de Lumieres are an ancient quarry that is now used for regular exhibitions with artworks projected against the quarry walls and music, a real spectacle of light and sound.

The spectacle changes each year: we have visited on two different occasions and both were very memorable. See Carrières de Lumières in Baux-de-Provence for information.

Keep walking just a short distance beyond the Carrieres de Lumiere and there is another exceptional viewpoint across the valley.

Map of Baux-de-Provence and places nearby

Visit near Baux-de-Provence with France This Way reviews

Plan your visit to Baux-de-Provence, Bouches-du-Rhone