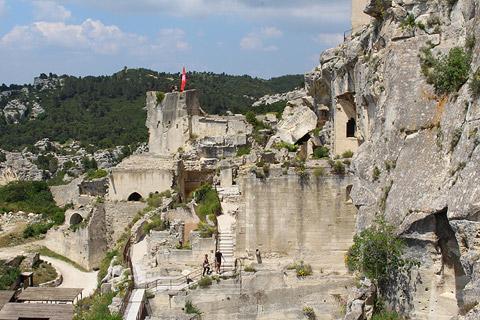 Explore the Castle of Les Baux-de-Provence

The castle is on a large raised rock promontory and the castle and surrounding grounds occupy about seven hectares: quite an extensive area! The admission price includes an audio guide (available in French, English and several other languages) that explains the history of the castle and of the lords of Les Baux as you explore. 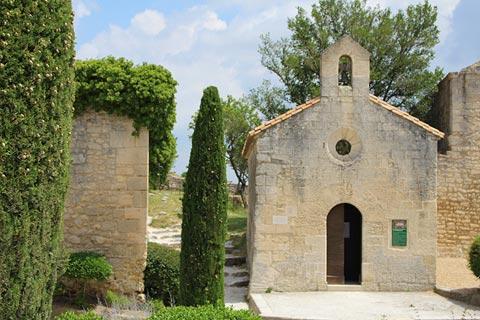 This raised area has always been attractive to people looking to defend themselves, and has been inhabited since neolithic times. In one part of the castle you can see the marks left on the walls when it was a quarry in the first century! The first castle was built here by the 9th century, and greatly fortified during the four centuries that followed.

As you enter the castle grounds you will notice a small chapel. This was built in the 12th century and constantly shows a film called "Provence Seen From the Sky", which includes footage of various other important sites in Provence.

The principal buildings you see in the Chateau des Baux-de-Provence are the 13th century donjon (tower), and several troglodyte rooms, passages and a chapel as well as a pigeonniere carved into the wall of the donjon and three towers around the donjon. The stairways that climb the towers are open to the public but care is needed: 800 years of footsteps has made the steps extremely eroded in places!

In various places around the castle buildings you will also notice full scale reconstructions of medieval weapons such as the battering ram and the catapult. These are interesting to see - I thought the protective roof over the battering ram to stop things being dropped on the soldiers from the castle walls was a good idea!

The other major attraction of the castle are the impressive views across the valleys around Les Baux-de-Provence and across the village: these views are really quite spectacular, and even better when you go up the towers of the castle.

Entrance to the castle costs around 10 euros, and a combined ticket to enter both the castle and the Carrieres de Lumieres in Les Baux-de-Provence is 18 euros. Small reductions are available for children, students and the unemployed.

The other principal attraction here, apart from the village of Baux-de-Provence itself, is the remarkable sound and light spectacle in the Carrières de Lumières.

See more castles in France. You can find more travel ideas in the Bouches-du-Rhone guide and the Provence guide.

Map of Château des Baux-de-Provence and places nearby