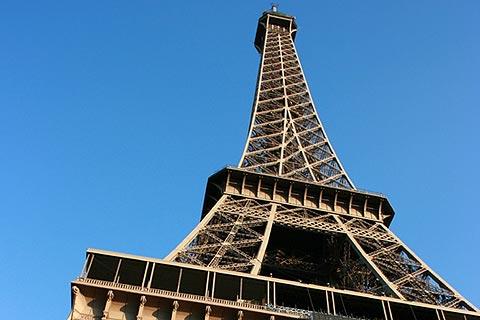 The tower is the tallest structure in Paris, standing at 1,063 feet (325 meters), and is also one of the city’s most visited landmarks (although it has been said that few Parisians actually visit the Eiffel Tower). It was originally built as a temporary structure that was to be torn down after 20 years, but survived criticism and demolition to become the icon it is today.

Design and building of the Eiffel Tower

Designed by its namesake, the engineer Gustave Eiffel, the plans for the tower were among 700 proposals for an entrance arch to be built for the 1889 World’s Fair, which also commemorated the centenary of the French Revolution. It had been previously proposed to, and rejected by, a similar competition in Barcelona. 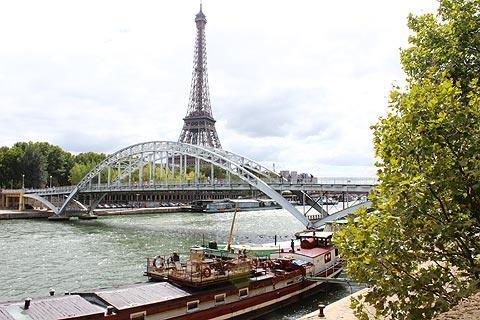 Construction took roughly two years, and the tower was completed and inaugurated in March of 1889, and opened in May of the same year. Until 1930 when the Chrysler Building was built in New York City the Eiffel Tower was the tallest structure in the world.

Structurally it is just a frame, with eighteen thousand pieces of iron held together by two and a half million rivets. But the design was calculated and deliberate, and took into consideration the tower’s great height, as well as wind resistance. In a remarkable feat, all the pieces of iron were pre-cut and the rivets put in place before construction of the tower even began

The original permit for the tower was only for it to be kept for 20 years and it was due to be torn down in 1909.

However, the dawn of the radio age changed its course in history. At the turn of the century, the tower became the perfect transmitter for radio signals and long range communication and it was from here in 1913 that the United States and France conducted a joint experiment to send radiowaves between Paris and Washington DC.

Significant moments in the Eiffel Tower’s history include being hit by lightning in 1902, used as a billboard for Citroen from 1925 to 1934, and being sold as scrap metal by a con artist in 1925 – twice!

Is the Eiffel Tower beautiful?

The Eiffel Tower initially drew the ire of Parisians. Its frame design was considered by many to be ugly, harsh, and generally an eyesore. Many of the Parisian artistic elite of the time, including Charles Garnier (architect of the Paris Opera) and Alexandre Dumas, objected vigorously to the design. Different stories relate that Guy de Maupassant promptly left Paris so he never had to look at it again, or that he insisted on eating in the restaurant in the tower because it was the only place in the city where he didn't have to look at the tower.

Even today opinions are mixed, and while the tower has a certain beauty it does, at least from some angles, look rather like an enormous pylon. Still, no one is going to propose that it be demolished and it is such an icon of Paris that visitors will want to visit to decide for themselves. Interesting rather than beautiful perhaps.

As a tourist attraction the tower attracts an average of 10,000 visitors a day, who have access to all three of the main levels, with the highest reaching 902 feet (275 meters). There are also two restaurants in the tower. If possible we suggest you visit the tower on a very clear day, and about an hour before sunset.

The area below the tower, like the area in front of the Cathedral Notre Dame de Paris, is always busy and one of the main centres of tourist activity in Paris. 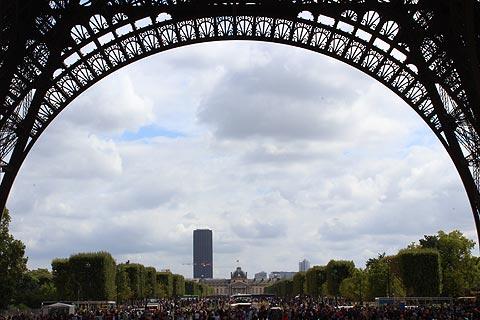 Various options and prices are available to visitors depending on whether you want to go the highest 3rd level or only go as far as the second level, and whether you want to walk up to the second level from the ground or take the lift. The walkway is less steep than you would expect because it zig-zags back and forth within the legs of the tower. Access from the 2nd level to the 3rd level is by lift only. Queues are involved at most stages of the process!

The Eiffel Tower is also open until late in the evening so you can see across Paris by night, and is also brightly lit for a few minutes each hour after sunset. The Tower welcomed its 200,000,000th visitor in 2002 which must certainly make it the highest earning steel pylon in the world!

Note that you can of course see the Eiffel Tower from many places in Paris, but the best views include those from the other side of the Seine just north of the tower, and from the terrace in front of the nearby Trocadero Centre.

Map of Eiffel Tower and places nearby

Visit near Eiffel Tower with France This Way reviews