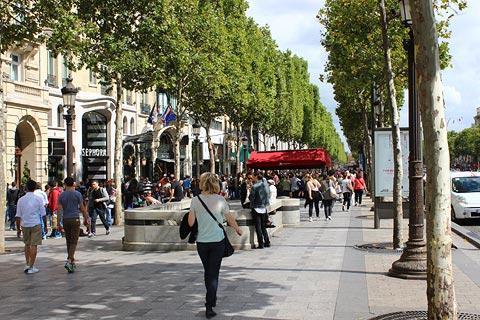 The Avenue des Champs-Elysées is a long and very famous avenue in the heart of Paris. The Arc de Triomphe is at the western end of the avenue and the Place de la Concorde and Jardin des Tuileries (the large gardens in front of the Louvre) are at the eastern end, with the Grand Palais, Petit Palais and Pont Alexandre III among the important monuments along the route.

The Avenue des Champs-Elysées is often referred to as the 'most beautiful avenue in the world'. Whether that is true or not - and it certainly might be - it is certainly an unmissable highlight of your visit to Paris!

Walking along the Champs-Elysées

Of course you can walk either way along the Champs-Elysees, or both if time permits! The main part of the avenue is about two kilometres long but if you plan to just walk along the avenue itself you should allow at least a couple of hours: it is a place to stroll along enjoying the atmosphere, not to walk at break-neck speed! If you want to explore the parks and monuments as well you could easily take all day. 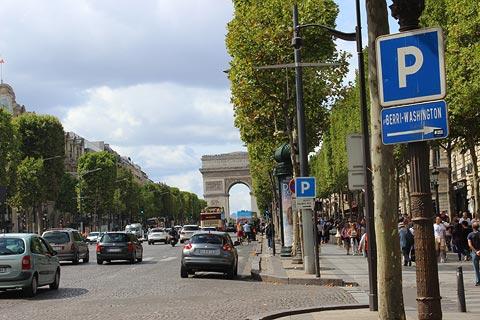 Starting at the Arc de Triomphe you can look further west along the Avenue de la Grande Armée to the Défense region, the financial centre of Paris and an imposing modern contrast with most of the centre of Paris. The Avenue de la Grande Armée continues the straight line of the Champs-Elysées, and ends at the Grande Arche, the third in the line of arches along the avenue and which also includes the Arc de Triomphe and the arch in front of the Louvre.

Your visit to the Arc de Triomphe includes views along these avenues and the others that radiate out from the Place Charles de Gaulle. From here you can start walking east along the Champs-Elysées, a long straight avenue with a wide road down the middle and trees along the sides. The avenue is no longer an exclusive promenade for the rich, and while you will find various 'luxury' shops you will also find many high-street brands and chains of shops, upmarket restaurants and fast-food restaurants.

Even if you don't like shopping (I don't either!) it is still entertaining to walk along the Champs-Elysées watching all the people and enjoying the atmosphere. You will also recognise the avenue from its many appearances on television, from military ceremonies to the last day of the Tour de France each year.

After the roundabout called the Rond-Point des Champs-Elysées the avenue changes in character, with more trees and less shops. Two well known theatres are to the east of the roundabout: the Theatre du Rond-Point and the Theatre Marigny. To see the famous Theatre Champs-Elysées you will need to take a short detour to the south-west along the Avenue Montaigne from the roundabout. Constructed in 1913, this art-deco style theatre forms an interesting contrast to the surrounding buildings.

It is also next to the roundabout that you reach one of the most important groups of buildings and monuments in the centre of Paris: the Grand Palace, the Petit Palace and the Pont Alexandre III. These are to the south of the Champs-Elysées and were all built at the same time, just before 1900.

The Universal Exhibition of 1889, with the Eiffel Tower built as its centerpiece, had been a great success and Grand Palace, the Petit Palace and the Pont Alexandre III were built for a similar Exhibition in 1900.

The two impressive palaces face each other across the Avenue Winston Churchill and are now used for various art exhibitions, and the Pont Alexandre III bridge is one of the most ornately decorated bridges in Paris. It is not easy to see from the outside but the roof of the Grand Palace is a remarkable architectural feat of iron and glass that spans an enormous interior space. Apparently there is more iron in this roof than in the Eiffel Tower! 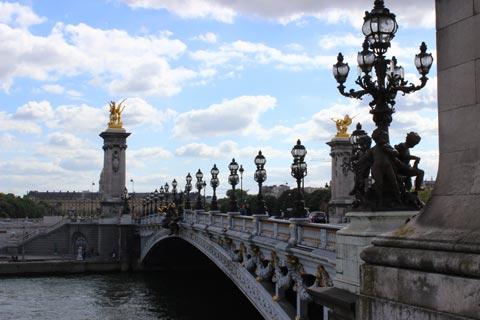 After the challenges of the traffic in Place de la Concorde you can continue in to the Jardin des Tuileries and a much earned rest in the shade!

Map of Champs-Elysees and places nearby

Visit near Champs-Elysees with France This Way reviews