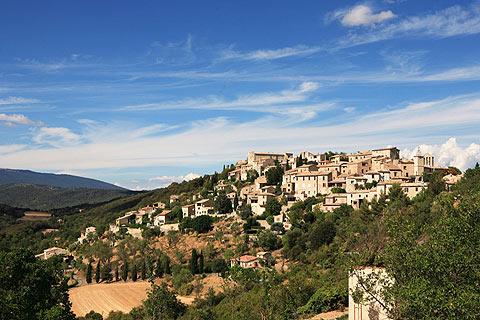 Lurs is a perched Provencal village spread out along a ridge high above the olive groves of the Durance valley, just east of Forcalquier and north of Manosque in the south-west of the Alpes-de-Haute-Provence department.

History tells us that the Emperor Charlemagne founded Lurs in the 8th century - legend perhaps, but the history of the village certainly dates back at least 1000 years when the bishops of Sisteron established a summer residence here.

France This Way comment: it is interesting to know that Lurs village had become almost abandoned over the centuries, until the 1950s when it started to be repopulated and the properties renovated, often by artists and printers.

Even before you arrive in the village centre, the view of Lurs spreading down the hill as seen from the approach road is one of the highlights of a visit. 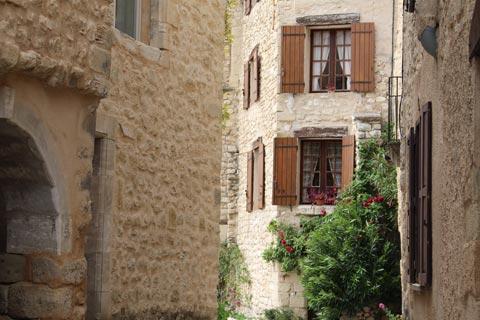 Start your visit at Lurs tourist information centre, in the small square at the end of the village. It is easy to find you way around in Lurs: there is one narrow road from one end to the other that passes most places of interest and a few smaller roads to explore along the way.

Before entering the main part of Lurs village you can first walk a short distance in the opposite direction to see the Chapel of Saint-Michael.

Enter the historic village through a stone gateway that passes under a 15th century clocktower topped by a traditional Provencal campanile. As with so many small villages in Provence, it is Lurs itself that is the highlight, rather than any particular individual monument, as you will discover as you explore the historic heart of the village, with many beautifully renovated traditional cottages lining the narrow streets.

Although they appear older many of the houses date from the 17th and 18th centuries, although some of the oldest are believed to date from the 15th century. There are a couple of small features of note as you explore, including the village church, just beyond the entrance to the village and with a decorative entranceway and a belltower forming part of the facade and containing three bells.

You next reach the Chapel des Penitents, and then a small open air theatre, the Theatre Marius. Towrds the far end of the village there is ancient castle, once part of the property of the bishops of Sisteron.

The Triple Murderer of Lurs

When visiting ancient villages we become accustomed to historical tales of drama and murder. Unfortunately the murders of Lurs are much more recent. The village came to the attention of the country in 1952 when a leading English scientist visiting the village, Sir Jack Drummond, was brutally murdered here along with his wife and daughter on the 4th August 1952.

No reason was ever discovered for the crime, and the murderer was never found (although the main suspect, a farmer who lived nearby, is claimed to have later admitted to the murders).

If you continue further in the same direction through Lurs there is a path called the 'Promenade des Eveques' to reach the Notre-Dame de Vie Chapel. You will want to see the chapel but the walk is also very scenic with extensive views across the countryside, with the fields of lavender, olive trees and poppy fields to the mountains beyond. It is only a few hundred metres long and we recommend you do it! 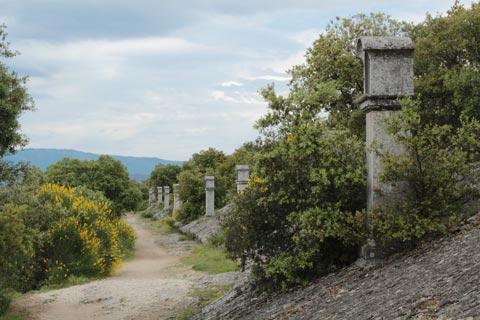 Although this is not the most visited part of Provence (which explains the limted number of visitors in Lurs compared with, for example, the villages of the Luberon to the west), in the surrounding countryside you will discover several towns and villages that are typical of 'traditional' Provence, and relatively unchanged by tourism.

There is a small road from Lurs to Ganagobie, which has a church as part of the Priory of Ganagobie with remarkable mosaics from the 12th century.

The area south of Lurs around Valensole and Manosque is especially well known for the lavender fields and beautiful from mid-June to mid-August, the lavender flowering season, when the rows of purple flowers dominate the landscape.

Map of Lurs and places nearby

Visit near Lurs with France This Way reviews

Plan your visit to Lurs, Alpes-de-Haute-Provence

The French version of this page is at Lurs (Francais)