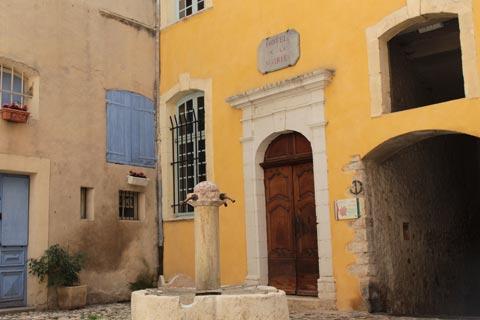 Riez is a small Provencal town situated below the hill of Saint-Maxime in the lavender fields of the Alpes-de-Haute-Provence department, between Valensole and Moustiers. Riez is officially listed as a 'village of character' and falls within the Verdon Natural Regional Park.

The origins of Riez date back to the gauls, when it was an important regional centre, followed by the Romans who established a town here in the first century AD after they had conquered the region. These early settlements were on the fertile plain which lies below the medieval village we see today, which had relocated to the nearby hill because the location was more easily defended

France This Way comment: although Riez is a pleasant town and includes several historical monuments it is not as attractive as some Provencal towns and we would perhaps only visit if we were in the region, for example to see the lavender fields around Valensole. 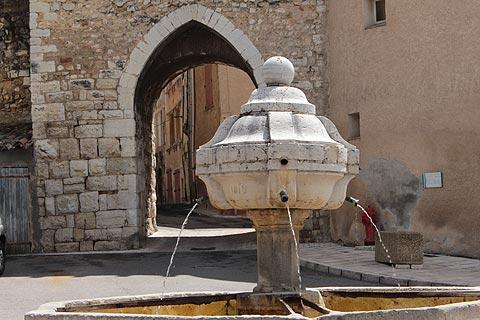 The main town centre is along the Allée Louis Gardiol where you will find several restaurants and shops, and the 16th century cathedral of Notre-Dame de-l'Assomption, with the historic centre in the streets to the north of here. This small town is quite compact, with attractive old stone and pastel painted houses lining the streets of the 14th century heart of Riez.

You will see various traditional Provencal fountains as you explore, a traditional public washhouse and various carved stone decorations on the house fronts; some of the best of these are at 27 and 29 Grand Rue. Parts of the medieval fortifications can also be seen, including the clocktower and two original entry gateways at the Porte Ayguiere and Porte Samson.

One of the most attractive small squares in Riez is reached by a passage from Allée Louis Gardiol next to the Post Office and includes the original town hall as well as the Riez tourist office.

It is on the edge of Riez that you can see the two most interesting monuments in the town - the Roman columns and the baptistery - and a reminder of how long the town has been established here. These monuments were not signposted very well from the centre of the town: they are both close together and a few hundred metres south-west of the centre of Riez! Because of these ancient monuments the village is also sometimes called Riez-la-Romaine.

The first monument is four corinthian columns, all that remains from a Roman temple to Apollo (the 'Temple of Riez') that once stood here. Archaeological excavations have also discovered a substantial thermal baths here. The columns are in a large park area which is ideal for a picnic.

The second ancient monument to see in Riez is the ancient baptistery, the other side of the small river that crosses the park. Possibly 5th century in origins, the baptistery is all that remains of a very early cathedral complex that once stood here. Square on the outside, the interior is octagonal with eight columns supporting the roof dome.

Note the baptistery is locked so you can peer into the gloom from the outside but it is not easy to see the columns! 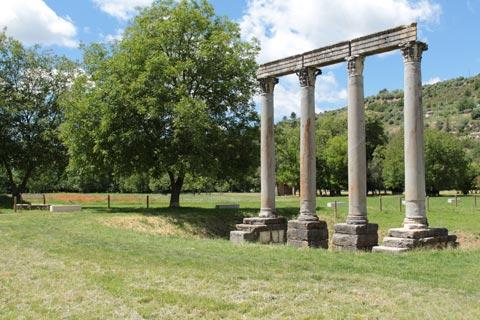 You can ascend the hill for lovely views across the surrounding countryside and to see the Chapel Sainte-Maxime.

In addition to the small villages to explore nearby (be sure to visit the very scenic Moustiers 10 kilometres north-east of here) and the splendid scenery, the main attractions close to Riez are the Lake of Sainte-Croix and associated leisure activities and the stunning Gorges du Verdon to the east.

Map of Riez and places nearby

Visit near Riez with France This Way reviews

Plan your visit to Riez, Alpes-de-Haute-Provence

Regular market(s) are held in Riez each Wednesday & Saturday. (Markets are held in the morning unless stated.)

The French version of this page is at Riez (Francais)