The Ile Sant-Honorat is the second largest island in the Iles de Lérins group, near Cannes on the French Riviera. Most visitors arrive here on one of the many boats from the old port in Cannes, although you will also find boats available in other nearby resorts, such as Theoule-sur-Mer, Juan-les-Pins and Mandelieu-La Napoule.

The island gets its name from Honoratus, a Gallo-Roman who visited here and established a monastery in the 4th century.

The principal reasons that visitors come to the Ile Saint-Honorat are to follow the coast path around the island and to visit the Abbey de Lérins and the associated fortress. 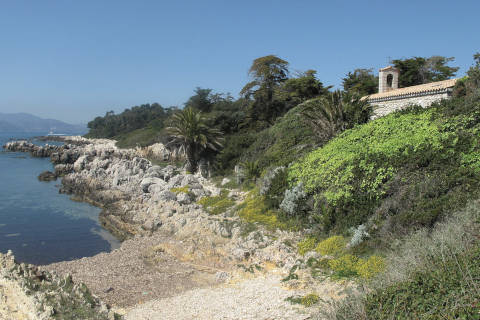 For several centuries, invasions by Sarrasin pirates made life almost impossible here which is why from the 10th century onwards there was a fortress to help defend the island. The main fortress building was built in 1073 and is the substantial structure you can visit today. Despite these attacks the monks remained here until the 18th century.

The monastey was dissolved, like all monasteries in France, at the time of the Revolution, and stood empty for almost 100 years until it was reoccupied in 1869 by a group of Cistercian monks, and the Cistercians continue to operate the abbey today. The abbey is still an important pilgrimage destination: traditionally, pilgrims arrive on the island then make the tour of the island barefoot, visiting the seven chapels on the island as they walk.

The most interesting of the chapels is the Chapel of the Trinity, at the eastern end of Ile Saint-Honorat and a charming building in the roman style, built with stone recuperated from older buildings here.

As on Ile Sainte-Marguerite, you can also see ancient ovens (fours à boulets) at either end of the island: these were used to 'cook' cannon balls to very high temperatures, so that if they hit a ship they were likely to cause a fire.

Walk around the Ile Saint-Honorat

Although substantial parts of the buildings date from the 19th century the abbey complex has several interesting features and incorporates the original church and monks accommodation. Among the highlights is a charming icon of Saint-Honorat, and various elements of the earlier building can still be seen in the cloisters.

A footpath follow the coast all the way around the Ile Saint-Honorat. Altogether it is around three kilometres long and will only take you about one hour to complete, plus time to visit the Abbey and take a look at the fortress on a small peninsula near the abbey.

The vineyard that you will see on the island is quite small at eight hectares but produces 35 000 bottles of highly rated wine each year, as well as the 12 000 litres of liqueurs produced in the monks distillery. A significant amount of the money raised from this industry is used to support charitable causes. 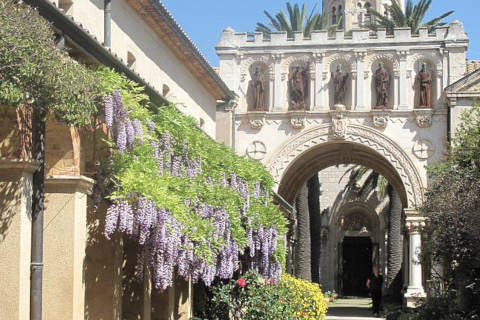 The island of Ile Sainte-Marguerite, the other important island in the group called the Iles de Lérins, has a royal fortress to visit and is a short distance north of Ile Saint-Honorat.

Map of Ile Saint-Honorat and places nearby

Visit near Ile Saint-Honorat with France This Way reviews