The Ile Sainte-Marguerite is in the small group of islands called the Iles de Lérins, in the Mediterranean a short distance away from the Cote d'Azur and Cannes. The principal departure point to get here is from the old port in Cannes: boats are operated by Planaria de l'Abbaye de Lérins.

There are several reasons to visit the Ile Sainte-Marguerite, with the walk around the island and a visit to the Royal Fort being the most important. 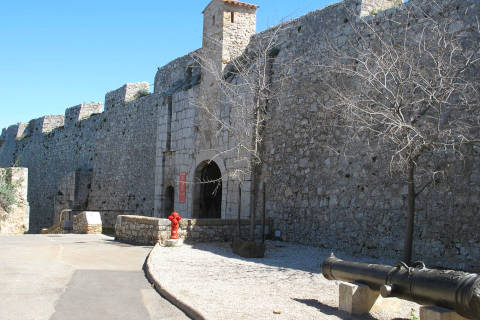 The Royal Fort, on the north coast of the island, was built by Richelieu then later fortified by Vauban. It has several buildings to explore and also includes a Marine Museum. You can follow the path around the ramparts of the fort for panoramic views across the fort and to Cannes to the north.

The fortress is well known as being the place where the Man in the Iron Mask was imprisoned for 11 years, from 1687 to 1698, before being taken to the Bastille. Little is known of this prisoner, made famous in a book by Alexandre Dumas in the 1840s, and it is not even certain whether his mask - which was never removed - was made from iron or cloth, but he was believed to be a relative of King Louis XIV and his life and story has inspired many films and books.

On the coast to the east of the Fort Sainte-Marguerite, various excavations show that several villas with mosaics stood here in the the Roman period.

Two other interesting buildings at the extremities of the island are the small 'fours à boulets', ovens that were originally used to heat cannon balls to very high temperatures. These were then fired at attacking ships, with the intention that as well as causing damage they also start a fire on the ship. Two more of these can be seen on Ile Sainte-Marguerite.

Walk around the Ile Sainte-Marguerite

The walk is easy to follow, about five kilometres long, and will take you about two hours, plus the time to visit the Royal Fort.

There is a bird observation point at the Etang du Batéguier, the sea lake that you walk around to the west of the island. 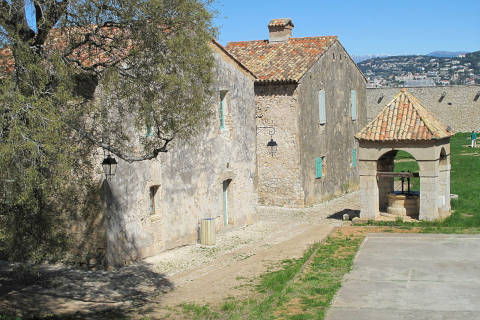 Map of Ile Sainte-Marguerite and places nearby

Visit near Ile Sainte-Marguerite with France This Way reviews