Carlux is a small village in the Dordogne department situated between Sarlat-la-Canéda and Souillac. This traditional Perigord village is small but has a few notable monuments and charming stone houses with tall rooves and wooden shutters.

Carlux is a small but pretty village dominated by its castle in the village centre. The castle was built in the 12th century on the remains of a previous castle probably dating back to the 10th century.

A turbulent history means that the castle has been destroyed and rebuilt a number of times. Originally it was not much more than a watch tower but during the Middle Ages it was attacked and burnt several times and rebuilt and grown in size each time. At its largest it also occupied the space now taken up by the Place de la Mairie. 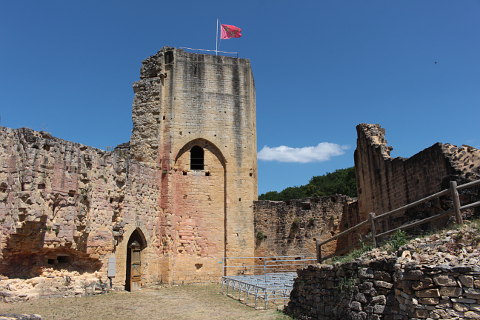 During the Hundred Years War the castle was again attacked and set alight and in 1481 King Louis XI ordered the chateau be destroyed.

Duing the Middle Ages Carlux developed and prospered as it sat on important trade routes between Sarlat and Souillac. However the Hundred Years War decimated the area and Carlux was not close enough to newer trade routes and the village fell into decline. This does however mean that Carlux retains its medieval appearance and is a very pretty village.

Carlux castle has been given to the village by its owner and some repairs made so that now you can visit the site and see the keep and inner courtyard.

The church was built in the early 14th century during the Hundred Years War which is apparently why it is simple in style and decoration both inside and out.

Another notable building in the centre of Carlux is its 19th century market hall with stone pillars and an impressive wooden roof. There is also a rather unusual very tall chimney in the village which was built in the 14th century. Known as a 'Sarrazin' chimney this was lit during epidemics to warn visitors not to approach!

Carlux endured another tragedy in its history during the Second World War. A barrier was put across the main road, the RD703, at the neighbouring village of Rouffillac to slow down the German troops moving to Normandy. A German soldier was killed in a subsequent attack by Resistance fighters. In reprisals the Germans burnt down the village and killed 18 people including 16 civilians. There is a memorial on the RD703. 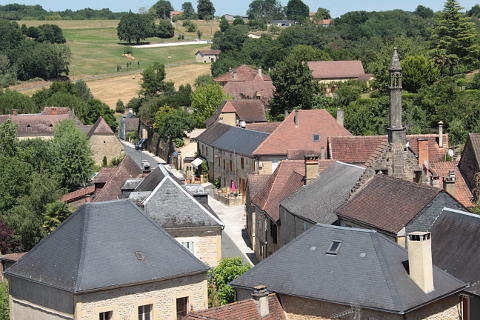 Carlux is home to one of the nicest gardens in the Dordogne department. Les Jardins de Cadiot  were created in the 1980s and is a series of gardens including an English garden, a peony garden and a Tuscan garden. There is also a small cafe with homemade cordials and cakes.

Sarlat la Canéda is a beautiful medieval town and the highlight of a trip to the Dordogne area.

Map of Carlux and places nearby

Visit near Carlux with France This Way reviews

Plan your visit to Carlux, Dordogne

The French version of this page is at Carlux (Francais)