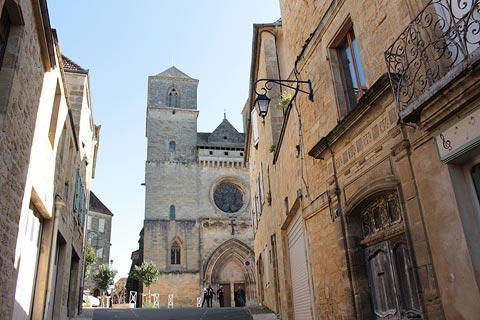 Gourdon is a small town in the Lot department of the Midi-Pyrenees, near the border with the Dordogne and 25 kilometres south-east of Sarlat. (Wrong Gourdon? There is also a popular destination with the same name in Provence: see Gourdon, Provence.)

Historically Gourdon was an important town and at one time the town had four monasteries. The town was given by Count Raymond I of Toulouse to the Gourdon family in 961 but they were nearly wiped out in 1189 by Richard the Lionheart. Rumour has it that the Gourdon family were later avenged by a surviving son who fatally shot Richard in the shoulder at the siege of Chalus.

France This Way comment: Gourdon is a charming little town with houses of honey coloured stone and set on a hill so that it can be seen for miles around. The historic centre is very well preserved and a visit to is recommended.

The old town is surrounded by a wide boulevard where you will find somewhere to park as well as various restaurants. There is also a car park to the east of the town in Place du Général de Gaulle. 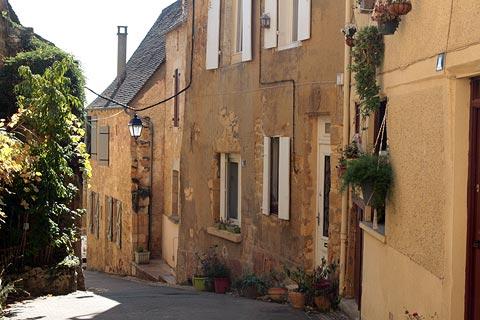 It is straightforward to explore: stroll along the streets, moving slowly towards the top of the hill! Gourdon combines some elements of a bastide town, such as a planned layout, with the defensive position of being on a hilltop. The defences around the town - you will notice ancient gateways as you explore - were added to throughout medieval times after the village was invaded several times between the 12th century and 15th century, first by the English then later by bands of thieves.

You eventually reach the church, from where a path continues up the hill to the ruins of the castle at the top of Gourdon. To make sure you don't miss anything pick up a brochure from Gourdon tourist office and follow walk number 1 and walk number 2 to see the main points of interest.

The imposing Church of Saint-Pierre was built in the 14th and 15th centuries on the site of an even older church and dominates the skyline of Gourdon. The interior of the church is mostly a baroque style reconstruction from the end of the 17th century: features of interest include the rose window, the altar and paintings in this part of the church and the marble font.

Below the church you have a warren of little streets with medieval houses and some interesting shops to explore. Among these, the Rue du Majou is now a quiet street but was originally the main thoroughfare through the town.

As you wander the streets of Gourdon you will see other interesting monuments, such as the Maison Cavaignac with a decorative renaissance entrance and the 16th century Maison du Senechal and many other buildings in the yellow stone typical of the region.

From the side of the Church of Saint-Pierre you can continue along a path to reach the ruined castle above the village. There is not much castle to see but there is a ‘table of orientation’ allowing you to identify the surrounding sites and enjoy the lovely view.

When you come back down the hill, another interesting church in Gourdon is the Church of Notre-Dame des Cordeliers, dating from the 13th century although the imposing square clocktower was added at the end of the 19th century. This church is now used for various exhibitions: the church is south of the town centre on Avenue Gambetta.

You can also see the smaller Chapel Notre-Dame-des-Neiges, a more modest church that contains an impressive gold altarpiece and has a curious baroque entrance that looks as if it was pieced together from parts left over from other projects... 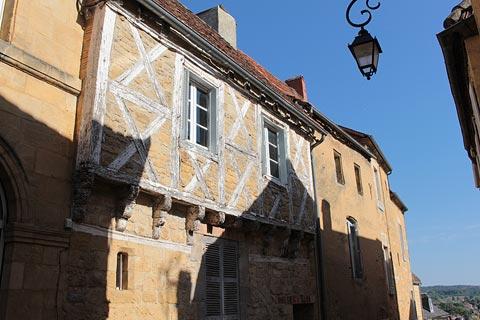 Attractions near to Gourdon

Gourdon is a good size town and would make a good base to explore nearby sites in Lot and the Dordogne. Highlights close by include:

Gourdon is set in attractive countryside, and there are numerous small villages to discover nearby. Often without major highlights, but each with its own charm and personality, located in particularly attractive surroundings, or with lovely views across the Lot countryside. Be sure to visit some of these: Saint-Germain-du-Bel-Air, Saint-Projet, Concorès, Saint-Clair, Saint-Cirq-Souillaguet, Peyrilles, Saint-Chamarand, Lamothe-Cassel, Montamel and Saint-Cirq-Madelon.

A little further from Gourdon and there are numerous highlights such as the village of Rocamadour, the Grotte (Gouffre) de Padirac, Dordogne towns and villages such as Domme and Sarlat...and many others!

Map of Gourdon (Lot) and places nearby

Visit near Gourdon (Lot) with France This Way reviews

Regular market(s) are held in Gourdon (Lot) each Saturday.

A seasonal market is held in Gourdon (Lot) on Thursday. (Markets are held in the morning unless stated.)

The French version of this page is at Gourdon (Lot) (Francais)