French painter Paul Gauguin was a post-Impressionist painter, a co-founder and member of what was called the Synthetist movement. Though schooled in and heavily influenced by impressionism, Gauguin’s style pushed two-dimensional, flat forms, and Synthetism focused on synthesizing three things: outward forms, the artist’s perspective and feeling, and pure representations of line, colour, and shape.

Gauguin was born Eugène Henri Paul Gauguin in Paris France. His father was a journalist and his mother was the daughter of socialist leader Flora Tristan. At the age of three, Gauguin moved to Peru (his mother was half-Peruvian) because of political difficulties and the four years he spent there would heavily influence his art. Though his father died on their way to Peru, Gauguin – now seven years old - and his family returned to France live with his grandfather.

As a young adult, Gauguin entered military service, and it wasn’t until he was 23 that he returned to Paris, getting a job as a stockbroker, entering marriage, and fathering five children – all the while painting part time. A dozen years later, in 1885, Gauguin moved to and subsequently left his family in Copenhagen, returning to Paris to pursue painting full-time.

Gauguin was not very happy with Impressionism, and turned to the art of Africa and Asia which he felt had more symbolism and depth. His paintings became flatter and less subtle, with thicker outlines, more solid colour, and no attention to perspective. His boldly colourful renderings were a major influence on artists such as Matisse, Picasso, and the cubist movement.

Though historically influential, Gauguin did not achieve much success during his lifetime. In 1891, financially destitute, he chose to sail the seas and ended up in the tropics. Traveling, painting and working odd jobs, he succumbed to syphilis at the age of 54 in French Polynesia.

Still Life with Fruit and Lemons (1880’s) – An in-between work as Gauguin leaves Impressionism for post-impressionism, light for colour. 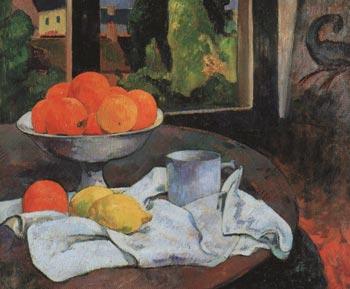 Vision After the Sermon, Jacob Wrestling with the Angel (1888) – The influence of Asian art on Gauguin, especially from Japanese prints, is very clear here. The shapes, colour, and angles are very dramatic, even though they are not ‘realistic’. 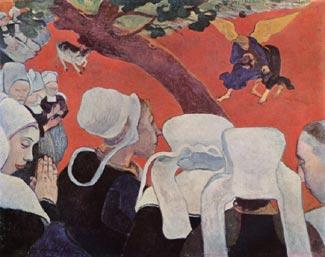 The Moon and the Earth (1893) – Synthetism focuses on the artists feelings – this painting places it’s importance on the emotional, even though we can read the painting as literal. 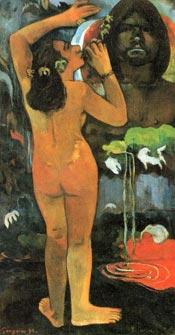