Explore France through its colourful history

Everywhere you go in France you will see sights that are a result of the countries checkered history, from Roman Monuments to Normandy Landing beaches, from medieval castles to ancient gallic battlefields.

From prehistoric cave paintings to the Roman conquest of the gauls, and from the Hundred Years War (and Joan of Arc!) and the Wars of Religion to the French revolution and the wars of the 20th century, there are numerous momentous events in France's history and every period has left its mark on the France that we see today during a visit.

On francethisway we are not trying to be a complete 'history book of France', but we are trying to introduce the most important historical events that shaped the France you will see when travelling around, and hopefully make your visit even more interesting.

There are many traces of prehistoric occupation in France, with the cave paintings at Lascaux among the earliest sites known. Later, prehistoric man in France built numerous monuments (eg dolmens and menhirs) in many parts of the country from Carnac in Brittany to Filitosa in southern Corsica. See details and prehistoric timeline...Prehistoric France

Modern day France, at that time part of Gaul, was conquered and then occupied by the Romans for several hundred years...France Gauls and Romans 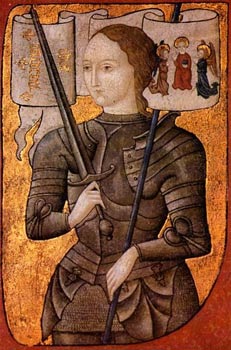 Medieval France was marked above all by its periods of religious intolerance, its violence and its wars, both against England and Spain and civil wars within its own frontiers. Wars that tended to last for decades, causing great suffering to large parts of the population. Three 'wars' in particular (although in reality comprising many smaller wars and crusades) stand out in this dark period of almost 500 years duration.

The War against the Cathars and the Cathar religion

One of the earliest tales of religious intolerance, the wars against the cathars and their religion lasted most of the 13th century...Cathar religion and persecution

From 1337 - 1453 a long series of wars took place between the French and the English, eventually ended by the heroic efforts of Joan of Arc...Hundred Years War

The Wars of Religion

In the 16th century the Catholics and the Protestants (Huguenots) saw each other as a threat, and from 1562 - 1598 the Catholics battled to contain the threat, with the St Bartholomew Day Massacre at the centre of the wars...Wars of Religion

The French Revolution transformed France into a Republic from a country revolving around a rich and powerful royal family, but the transition was a painful one.

Although there were subsequent events that reversed parts of this process, including both Napoleon and the short-lived restitution of the monarchy, the revolutionary spirit is perhaps still greater in France than any other European country.  See our guide to the main characters and events: French Revolution

As the First and Second World Wars slowly move beyond living memory, the events that unfolded in France are commemorated in almost every village and town in the shape of a memorial to those who lost their lives.

The most common way for visitors to remember the first world War is by visiting the site of the trenches and war cemeteries of northern France - there are many of these, see Aisne for some of the larger cemeteries in Picardy.

One of the most poignant destinations for those in search of historical references are the beaches along the coast of northern France - the Normandy Landing beaches. Another touching reminder of WWII can be seen in the village of Oradour-sur-Glane, left exactly as it was on the day the withdrawing Nazis destroyed the town and murdered many of the inhabitants.