French painter Paul Cézanne is one of the most important figures in 20th century painting, and is often cited as the ‘father’ of modern painting. He is considered to be the bridge between the art movements Impressionism and Cubism, a transition that occurred around in the early 1900’s. His art was largely misunderstood at the time, but was cited as a major influence by esteemed cubist painters such as Picasso and Matisse.

Cézanne was born in Aix-en-Provence in the south of France, into a very wealthy family. His father, a cofounder of a banking firm, supported Cézanne’s artistic lifestyle and later, through inheritance, gave him full financial security. Unlike most of his contemporaries, he never had to live a starving artists’ life. Cézanne did attend Law School at his father’s behest, prior to committing himself fully to his art. During the 1860’s, Cézanne became friends with fellow painter Camille Pissarro, who also became Cézanne’s mentor.

Cézanne tended to stay private, isolated from the arts scene, and focused on his work almost entirely. His phases of painting can be divided into three chapters – “Impressionism”, which relied on short brush strokes to capture colour and light ‘in the moment’, “Constructive”, where he developed his style of using colour to define shape and creating flatter paintings devoid of texture, and his “Late” period, where in virtual isolation he painted still-lifes and from memory.

Cézanne died in 1906 of pneumonia brought about from being caught in a storm. A year later, his paintings were exhibited in a retrospective in Paris, which made a huge impact in the arts world and giving birth to modern painting.

House of the Hanged Man (1873) – This incredibly textured work was actually reworked over and over by Cézanne, and he was apparently proud of it – he allowed this painting to be exhibited multiple times, which was rare. 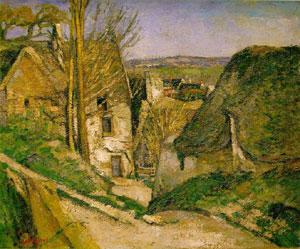 The Bather (1885-1887) – Cézanne modernized the male figure that his predecessors in the classical age had painted by furthering the perspective of Impressionism and abandoning the impulse to mimic ‘reality’ or idealize the subject. 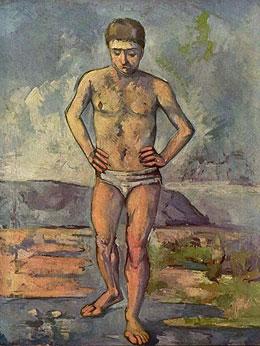 Chrysanthemums (1896-1898) – It’s flat, but alive. You can see how cubism drew its influence from Cézanne here. colours define the flowers, the space, the light – not quite cubism yet, but definitely beyond impressionism. 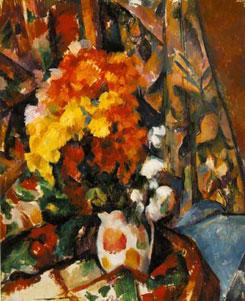