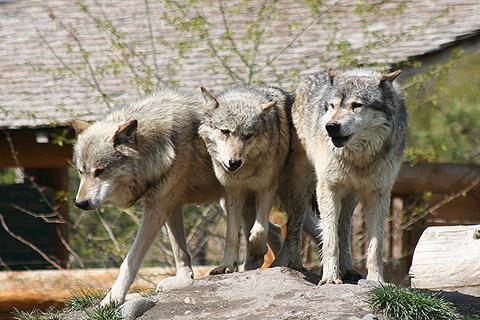 Wolves were actively hunted and killed in France during a large part of the 19th century, and became extinct in the country by the 1930's. Having once disappeared from France, wolves have now re-entered across the mountains from Italy, and are becoming established in the maritime Alps, in the Mercantour Parc.

They are not always welcome, and sheep farmers especially complain about the cost they represent to their livelihood. In France a compensation scheme has been established to compensate farmers whose sheep are killed by wolves. But wolves are less fearsome that they are often portrayed. As a rule they remain hidden, and will avoid contact with humans wherever possible.

Wolves usually live in packs, led by a male and a female, and a typical pack will include 6 - 10 wolves. The young, especially the males, will tend to leave the pack as they mature. A grown wolf is about 80cm high at the shoulder, and distinguished by its thick grey bushy coat.

Wolves usually prefer to inhabit high mountain regions, preferably forested but not always. They make dens in small caves, under rocks and branches, or in thickets. Mostly, wolves eat fruit when it is available. They also eat many of the smaller mammals such as rabbits and mice, and also birds, and larger mammals such as deer and boar, and occassionally sheep or cows.

You are extremely unlikely to come across wolves in France, even if you go looking for them, unless you are a French shepherd in a mountainous region. Even if you did come across them, they would almost certainly run away. Like wolves in other countries, they are destined to be reviled by many and supported by many, but for the time being at least it appears they are here to stay in France.