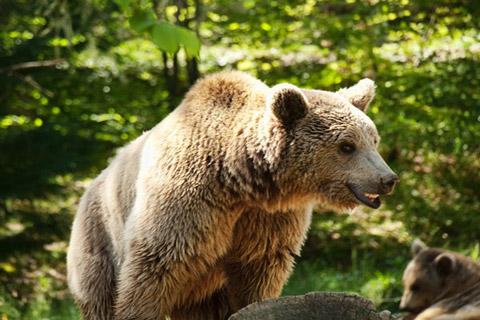 Like so many of the larger mammals, wolves in particular, bears in France have had an uneasy relationship with man.

Found only on small pockets in the Pyrenees, there is now a programme to release bears captured in Slovenia, and this has caused a great deal of conflict with local sheep farmers, although compensation is paid to farmers who lose sheep to bears.

The problem has arisen because over the last 100 years, shepherds have largely abandoned the dogs that once protected their flocks, and now also have larger flocks.

It seems probable that far more sheep are killed by wild dogs than by bears.

In November 2004 the last native female bear in the Pyrenees was shot 'accidentally' by hunters, leaving a total population of less than 20 bears, largely those that had been reintroduced. As a point of reference for the danger this presents, there are at least 5,000 bears living in New York State!

So you can be reasonably sure that you are not going to come across a bear in France, but if you do it will be readily identifiable! A furry brown-black coat, weighing up to 700kg, and standing a couple of metres high it would be easy to identify. Brown bears can run up to 50kmh and have claws up to 15cm long. The good news is, the claws are seldom used during hunting. The bad news, the teeth are used instead.

Brown bears do not hibernate, but they do become very lethargic during the winter, relying on fat accumulated during the summer months.

They are nocturnal animals, and generally eat berries, roots and other vegetable matter. They also eat fish and small mammals, and occasionally larger mammals such as deer. Meat only forms a small part of the overall diet.

And if you are attacked - lie down, in a foetal position, and pretend to be dead! Do not try to run away!