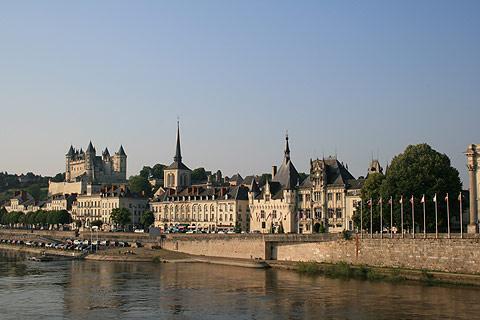 The Pays-de-la-Loire region is usually visited for its long sandy beaches, the important historical towns such as Nantes and Guerande, and castles such as those at Angers and Nantes.

While these are all recommended to visitors, you might like to also consider a journey into the quieter parts of the region by following one of the rivers that traverse the Pays-de-la-Loire.

Of course, the Loire river is the largest and best known of the rivers but there are also several smaller rivers that cross the region, providing numerous opportunities to enjoy the water, and accessible to boats, cyclists, walkers and cars.

The rivers below are all navigable, at least on their lower stretches, and the best way to see them is from a boat.

Boats are available for rent in many places along the rivers of the western Loire. On the upper parts of the rivers where boats are not practical you will often find footpaths adjacent to the rivers.

The River Loire traverses the region (from east to west) between Montsoreau and Saint-Nazaire by way of Saumur, Angers and Nantes.

Apart from these major and historically important towns there are numerous small villages and towns to explore along the course of the river - some of the most popular include Saint-Florent-le-Vieil, Le Thoureil and Montjean-sur-Loire.

The Loir River arrives from the Loir-et-Cher department of the Val de Loire to follow its course through the Sarthe and Maine-et-Loire departments before joining the Loire at Angers.

Less well known than 'big brother' the Loire River, the Loir is a pretty river to follow with plenty to enjoy en-route. The river passes (east to west) via Poncé-sur-Loir; La Chartre; Chateau-du-Loir; Le Lude (and the chateau du Lude); La Fleche and Durzal.

Each of these towns and villages, along with many others along the Loir, has its own attractions, and there are numerous churches, small castles, museums and gardens to visit.

There are also plenty of opportunities on the Loir to enjoy river-based (e.g. canoeing) and outdoor (walking, cycling etc) activities.

Other rivers that pass through the region, and each with their own particular attractions and highlights, include:

- the Erdre River: which flows from near Angers until joining the Loire at Nantes, and passes several imposing manor houses and castles along the way. Substantial parts of the river banks have been enhanced with scenic paths, and there are also two leisure lakes on the river

- the Mayenne River, which flows from the Mont des Avaloirs near Alencon and joins the Sarthe river near Angers

- the Sarthe River, with its origins in Normandy, passes through the Sarthe and Maine-et-Loire departments before joining the Mayenne north of Angers. The tree lined Sarthe river also passes through attractive countryside.