The River Vézère flows 190 kilometres from its source in the Massif Central to its confluence with the Dordogne River near Le Bugue (the confluence is in the village of Limeuil).

The Vézere Valley contains numerous traces of prehistoric and early settlement and according to UNESCO, who have the valley listed as a UNESCO French world Heritage sites, there are 147 prehistoric sites and 25 painted caves in the valley.

The main prehistoric highlights of the Vézere Valley - often called the cradle of mankind - are found along the lower reaches of the river, between Montignac and Le Bugue, and centred around the village of Les Eyzies-de-Tayac, usually called simply Les Eyzies.

France This Way comment: you are not usually allowed to take photos of cave paintings because they need protecting, so apologies that our photo galleries are less impressive for these sites than for most that we visit! 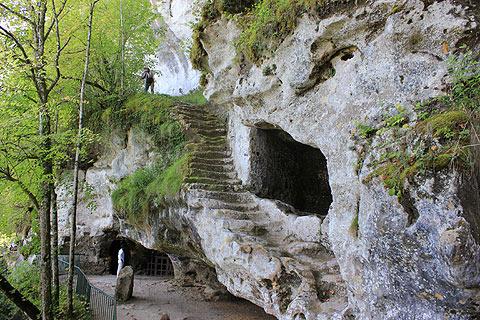 Les Eyzies village does not perhaps have a great deal to offer the visitor, having long given itself over to tourism, but it does make a good base to explore the Vézere Valley. The village has two interesting museums: the Musee National de Prehistoire and the Musée de l'Abri Pataud, which between them offer a good taste of the artefacts that have been unearthed in the countryside along the Vézère Valley.

If you are exploring the valley, you might prefer to base yourself either to the south at Le Bugue or to the north at Montignac, in the village of Saint-Leon-sur-Vezere or in one of the many other villages dotted around the area.

The best known prehistoric site in the Vézère valley are the Lascaux caves, prehistoric caves and cave paintings of world renown. At Lascaux you visit a copy of the caves, the originals being too fragile to cope with visitors, but that does not diminish from the power of a visit.

Among the most important of the other prehistoric sites in the Vezere valley are the Troglodyte dwellings at La Roque St Christophe. Another very important site is the Paintings at the Grotte de Font de Gaume, one of the few places where you can still see original cave paintings rather than a copy: to protect the paintings visitor numbers are limited.

Other historic sites well worth visiting in the Vezere valley include:

Several of the caves along the Vézère valley are designated as National Monuments (four out of 85 national monuments in France are in this valley!): 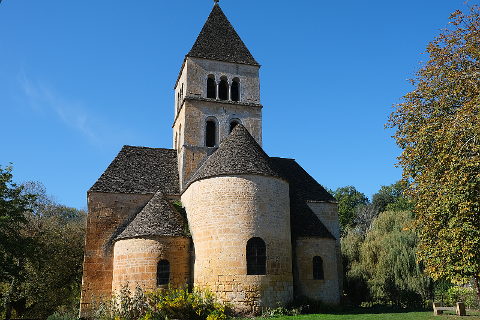 When you tire of exploring the prehistoric sites of the Vézère valley there are also several towns and villages of interest including Saint-Leon-sur-Vézere and Limeuil, both listed among the most beautiful villages in France, and the small town of Montignac near the Lascaux caves.

Map of Vezere Valley and places nearby