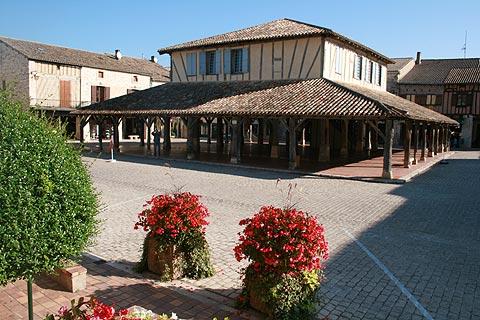 To the south of the very popular Dordogne department there is a sprinkling of towns and castles set in attractive countryside that are slightly beyond the better known tourist destinations - yet would make an ideal base for a holiday. While you won't entirely escape the tourist throngs, they are certainly less here than in the Sarlat region slightly to the north.

In this article we look at a few of the highlights of your visit. ( I am not going to describe all the attractions of the Dordogne region here - the caves, the villages, the river and countryside are renowned the world over and covered elsewhere in this guide at Dordogne.)

Found in the very southern part of the Dordogne region of France (and easily accessed from Bergerac airport), Monpazier is a really amazing town. Monpazier has preserved its medieval centre more or less intact - the arcades and market hall are still there, and there is little to break the illusion that you have stepped back 600 years in time. Monpazier is listed as 'one of the most beautiful villages in France' and is unmissable.

Two highlights in the Monpazier calendar include the 'flower festival' held each spring, and the bodega in the summer - a festival night, with wine, music and song, and careful lighting of the medieval buildings around the centre.

Monpazier was founded in 1284 by Edward 1 of England. One interesting story about the town tells how, during the Hundred Years War, the residents of Monpazier set off to plunder nearby Villefranche-du-Perigord. Finding Villefranche to be very quiet, they stole many things and returned home.

Unfortunately, the reason Villefranche had been quiet was because all the residents had chosen that very same night to plunder Monpazier. When the full story emerged, the residents of both Monpazier and Villefranche returned the things that they had taken from each other.

In 1594 and 1637 the town of Monpazier was the centre of peasant insurgence, triggered by the terrible conditions following the end of the Wars of Religion. On both occasions the rebellions were violently suppressed.

The 13th century town of Villefranche-du-Perigord, a few kilometres away, also retains an interesting centre and a medieval hall, but loses something in 'medieval authenticity' to its grander neighbour. It is a pleasant place to pass an hour or two wandering the streets, which are more lived-in than those of Monpazier, the town attracting less tourists.

More interesting is the countryside around the town, with rolling hills covered by ancient woodlands being a perfect region for walking and cycling.

Close by the town of Fumel has little to attract the casual visitor, but a visit to the gardens and belvedere at Fumel castle is worth a quick visit.

The Valley de Gavaudun runs due south from Monpazier, and has Biron at its northern end and the village of Gavaudun towards its southern end. A lovely valley through forests and open woodland, the valley contains three pretty little villages - Lacapelle-Biron, Gavaudun and St Avit. Each of these villages has its own particular interests.

Lacapelle-Biron has a couple of cafes and small shops; St Avit is a very pretty little pedestrian only village; and Gavaudun features an enormous 'donjon' (keep, or castle) on a rock, overlooking the valley. It is possible to enter Gavaudun castle and climb a staircase to the top but children may not be enthusiastic (or might be very enthusistic!) - it climbs through a narrow ancient passage to an open area at the top which vertigo sufferes might find unsettling.

All three of the villages are small and well deserve exploring.

Villereal is found 15km west of Monpazier. It is the liveliest of the small towns in the area, with a wider range of shops and facilities than the others mentioned here. It also is a bastide town, founded in 1269, and retains a rare hall in the central square and a fine church.

The little backstreets of Villereal are also well worth exploring, to discover the ancient stables, the leper house and numerous medieval half timbered houses - ask for the guided walk details in the tourist office.

Notably Villereal also has a cafe on the main square of the bastide - curiously unusual to find in the region and a great place for watching the world go by.

Castles in the southern Dordogne - Chateau Biron and Chateau Bonaguil

Both of these castles are highly recommended.

Chateau Biron is a very attractive was owned by the same family for many hundreds of years, who successfully enlarged and changed it during the centuries. It is found at the head of the Gavaudun Valley, just south of Monpazier, in a fine location overlooking the countryside. the small village of Biron itself has a church, cafe and some ancient houses with attractive gardens.

To the south of Villefranche-du-Perigord you must visit Chateau de Bonaguil. With a fascinating long history of neglect and tyrannical ownership, Chateau de Bonaguil is one of the finest chateaux in France. It is also one of the most frivolous, having been constructed after the need for medieval defensive castles had largely passed.

Bonaguil castle is a lovely castle to explore, with splendid views and a great setting above a small village.