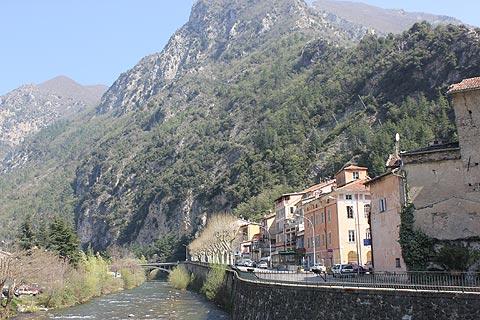 The Roya Valley follows the French-Italian border near Tende and through the southern Alps from the Mediterranean at Ventimiglia (Italy), and a day following its course makes a very enjoyable day trip from Menton or Nice on the French Riviera.

For our visit we are starting at Breil-sur-Roya and following the Upper Roya Valley upstream as far as Tende - south of Breil the river is largely in Italy.

The route can easily be completed in a day - although this won't permit time to explore the Valley des Merveilles in the Mercantour National Park near Tende - and is a good introduction to the impressive countryside of the southern Alpes-Maritimes, as well as a chance to visit several interesting towns and villages.

Travelling south to north along the Roya valley: highlights

You are likely to follow the same road in both directions so direction and order of visiting is unimportant.

As an alternative there is a 'tourist train' that operates between Nice (Nice Ville train station) and Tende and then on to Cuneo in Italy stopping at all the towns mentioned below and called the Train des Merveilles. This train follows a slightly different route in many places, and is an excellent way to enjoy the scenery. It is a lovely way to discover the Roya Valley, even if some of the viaducts appear rather perilous!

A pleasant and rather quiet town, Breil-sur-Roya represents the southern part of the Upper Roya valley and has several churches of interest as well as being in an attractive riverside setting and surrounded by high hills covered with forests and olive groves.

If time permits there are several walks in the surrounding countryide that start from Breil - ask in the tourist office in the main square. See Breil-sur-Roya for details.

From Breil-sur-Roya you continue north through the scenic Gorges de Saorge.

You will first glance Saorge high on the hill above when you exit one of the tunnels along the route - try and be driving slowly enough to take the turn to the right to see the small ancient bridge and pond as well as to better enjoy the view of the village before you immediately enter the next long tunnel!

After exploring the village return to the main road and continue north through the very picturesque Gorges de Bergue.

La Brigue is a village in a river valley about two kilometres off the main road, with an imposing church, several chapels, a ruined castle and a pleasant historical center. See La Brigue for details.

From here you can continue a few kilometres east along the valley to the Chapel of Notre-Dame-des-Fontaines, a small chapel with a remarkable interior decorated with frescoes often called the 'Sistine Chapel of the Alps'.

Ideally you will walk here from La Brigue but driving is also possible, with various oratories to admire en route. After visiting return to the main road and continue north across the mountain pass that leads to Tende.

The largest town in the Upper Roya Valley, Tende has a very extensive historical centre with tall buildings in the local grey stone and traditional slate roofs.

The most prominent monument in the town is the cathedral, its brightly painted facade bringing an unexpected splash of colour to the town, best seen from the cemetery on the hill above Tende. See Tende for details.

After exploring Tende, if you continue along the Roya Valley you will find yourself in higher mountains as you approach the Col du Tende (turning just before the tende Tunnel), a mountain pass at 1870 metres above sea level and reached by a steep road with a long series of hairpin bends before entering Italy. The road isn't always in good condition and lasts about seven kilometres - hiking boots or a mountain bike recommended!

Unlike most of this region the Roya valley did not become part of France in 1860. It was only after the second world war in 1947 that ownership transferred to France, hence there is still a strong Italian feel to the towns in the region.

Although Menton to Tende is only about 70 kilometres the nature of the roads means that you won't always be travelling at high speed! Accommodation options in the Upper Roya Valley are quite limited, hence most visits are as trips inland from the riviera.