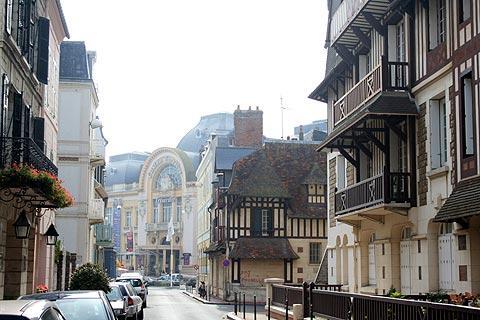 To fully understand Normandy, one has to visit more than WWII sites and museums. To experience this region and understand its history and culture, one should visit these eight venues:

This picturesque little port village has been a magnet for artists for years, including the French impressionists. The cobblestone streets of the town and the old basin full of sailboats are especially gorgeous. One can visit the many shops and galleries, and there are excellent restaurants nearly everywhere. There are several museums and unique old wooden churches to see as well.

A drive of about a half-hour to Deauville and Trouville is also worth the effort. Walk the famous boardwalk in Deauville, which has hosted the annual American Film Festival for years, and observe the interesting architecture of the huge beach houses, unique in Europe. On the way to or from Deauville, stop at a cider/calvados tasting location. Several are marked along the road. Grapes are not grown in Normandy to make wine, as the local beverages are made mostly from apples or sometimes pears.

The cider is fizzy and has only about one-third the alcohol of wine. It goes well with a local favorite, moules-frites (mussels and fries). Calvados is brandy made from apples. Speaking of food, Normandy is famous for its dairy products, and you’ll no doubt sample the butter (this is one of the few places in France where one is encouraged to butter bread) and cheeses, especially the three Normands (“les trois Normands”) camembert, pont l‘eveque, and livarot. (see Honfleur for details)

This city was rubble after the bombings of WWII. The Caen Memorial is easily the best of the WWII museums. There are many WWII museums throughout Normandy, and some are almost tacky, with only a handful of old pictures and a few old uniforms and medals. This one is first class and tells the story of the events leading up to WWII and the Battle of Normandy.

The film is also first rate and shows the American and German sides preparing for the invasion and then after the battles began. There is also a display honoring Nobel Peace Prize winners. One can easily spend half a day at this museum.

Downtown Caen is also very pleasant, especially the pedestrian street with its many shops and cafes. One can also visit the chateau, constructed by William the Conqueror, and several impressive abbeys and churches. See Caen for details.

This city was not badly damaged in WWII as the Germans retreated to defend Caen. The cathedral is imposing and is among the top gothic cathedrals in France. The main attraction in the town, however, is the famous Bayeux Tapestry.

This remarkable work, commissioned shortly after the conquests of England in 1066, tells the story of William the Conqueror and the Battle of Hastings. It was originally meant to hang in the cathedral. It is only 19 inches high, but it’s length is 203 ft. It is remarkably well preserved. Be sure to see the film, and rent an audio player to use while viewing the tapestry to get the most out of your visit. See Bayeux for details.

For Americans, this is hallowed ground. People from other countries, Canada and Britain, for example, might prefer to visit the sectors of their soldiers, such as Sword, Gold and Juno beaches which are several miles to the east. There are numerous British, Canadian, German, and other cemeteries throughout Normandy as well.

I was originally not excited to visit the American cemetery, thinking it would be a deflating experience. However, when one sees the fabulous white marble headstones and the meticulously kept grounds (the grounds are owned and maintained by the U.S. government) it is clear that there is huge respect for our fallen countrymen. To understand what these men did and the ultimate sacrifice they made in France makes one proud.

The largest of the two American cemeteries at Colleville-sur-Mer looks directly over Omaha Beach. (The other is at St. James, farther to the west, and is also worth a visit, although not many people go there. It‘s about half the size of Colleville and unique in its own way). Leaving the parking lot at Colleville, one can see a small monument to the American 1st Infantry Division, the Big Red 1, which was responsible for that sector on D-Day. This is also worth a quick visit. See Normandy Landing Beaches for details.

It was here that a huge artificial floating port was erected. The Germans knew the Allies would need a large port, and all of those in France were heavily defended. The sections of the port were constructed in England and were floated across the English channel just after D-Day.

The museum has an excellent model of the port and a good film. There is also a 360 degree theater on the hill overlooking the town. This film is one of my favourites, and it show scenes of the area, both during the Battle of Normandy and then contrasted with how they look today. See Arromanches for details.

At this strategic location American Rangers scaled the cliff walls on D-Day. There are bomb craters everywhere, destroyed German bunkers, and one gets a feeling of how difficult the fighting must have been. There were many casualties, and the Americans were almost driven back over the cliffs, but for some still unknown reason the Germans pulled the big guns back from the point to the rear. These were found unguarded by an American patrol, and they were quickly destroyed.

I was surprised to learn that the fighting here was much less intense than at Omaha, and the number of casualties here on D-Day was low, only about 15 KIA before noon. It is, however, a big part of the American D-Day story and therefore worth some time. The museum is reasonably good as well, and the grounds, again owned and maintained by the U.S. government, are well kept.

This spectacular setting on the border between Normandy and Brittany is one of the most popular tourist locations in Europe. The island village is dominated by the cathedral at the top. At certain times of the year the tides are high enough to surround the island by the sea.

If possible, spend a night on the island itself, and you’ll have a chance to wander around without the normal crowds. The shops are mostly tourist traps, but Mont St. Michel is worth a day. There are hikes and horse-back excursions one can take as well. See Mont St Michel for details.

The above general itinerary goes from east to west and will take nearly a week. There are of course other venues in Normandy to visit. The eight listed above, however, will give you a fulfilling experience, and upon completion you’ll be able to say that you have truly experienced and understand the culture and significance of this outstanding region.