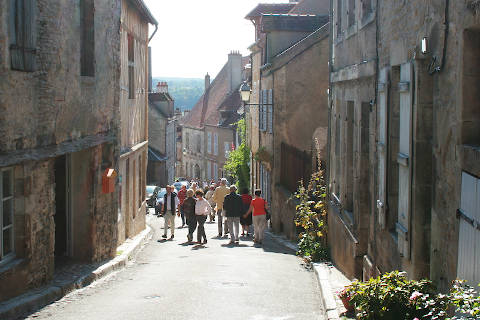 Every year thousands of pilgrims cross France, usually on foot or on bicycle, on the four main pilgrimage routes that lead, via Spain, to the shrine of St James at Santiago de Compostella (often spelt Compostela) in north-west Spain. These routes are also known as the 'Ways of St James'.

St James (James the Great) was beheaded by Herod - he was the first of the apostles to be martyred - and was thought to have been buried in north-west Spain. His tomb was, so they say, discovered in the 9th century, and a church was built on the site.

The place rapidly became a major pilgrimage destination, and during the Middle Ages up to two million people each year were attracted to the site. The pilgrimage itself often took (and still takes) many weeks or months, and involved crossing a large part of France and the whole of northern Spain.

Other churches were founded along the route and hostels and hospices opened to cater for the pilgrims. The routes tended to take in other places of religious importance e.g. Rocamadour, en route.

A tourist industry also built up along the pilgrimage routes, and the Codex Calixtinus (written in Latin by a French monk), published in the 12th century to help the pilgrims identify the best places to stay, is reputed to be the first ever tourist guidebook.

In many places across France, especially in the south-west, you will come across the 'shell' insignia of the pilgrims - the scallop shell is the symbol of the pilgrims and can be seen carved into numerous doorways in the region.

The significance of the shell arose because the earlist pilgrims carried back shells withthem to prove that they had indeed completed the journey.

UNESCO has now designated the entire route as a World Heritage Site, with 69 monuments along the route being listed as important.

The resurgence in popularity of the pilgrim routes in the last 15 years is undoubtedly largely because of this, and most who now walk the 'camino' do it for pleasure as much as to seek penance for their terrible sins!

The government in Galicia - the part of north-west Spain where Santiago de Compostella is found - actively promote Santiago and the camino pilgrimage paths as a tourist detination.

(Irrelevant note - I have some friends who bought a property about 50 metres from one of the principal pilgrimage routes, and they were told they need permission to plant anything bigger than a small vegetable in the garden, because the ground must not be disturbed!)

See the routes of the four principle pilgrimage paths across France.