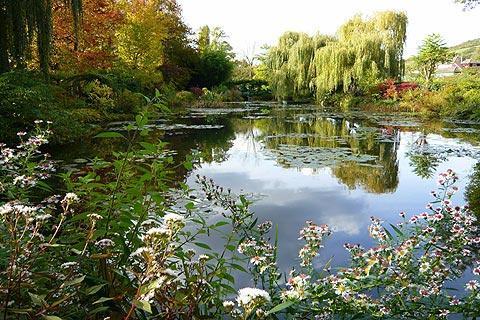 Where do you think of when asked to name the most famous sights in France? Here we have prepared a list of what we believe are the most famous places. We have selected just 10 places. Your own list will be different, I'm sure, and there are many top places in France that are contenders for the list.

Below we show the most famous individual highlights. See also most popular regions at where to go on your first visit to France.

We could easily have filled the whole list with famous places in Paris but for the sake of completeness it seemed best to include places all across France! The Eiffel Tower, the Champs-Elysées, Notre-Dame cathedral, the Moulin-Rouge and many more instantly recognisable sites.

The beaches where the D-Day landings took place, on the northern coast of Normandy, are a very popular pilgrimage spot, both for the beaches themselves and for the nearby war memorials and cemeteries...

Versailles is a famous chateau that was home to the French monarchy during the 100 years before the French revolution. 'Grand and impressive' doesn't even begin to describe the size and luxury of this palace...

This pilgrimage destination in the pyrénées attracts many, many thousands of pilgrims each year, for the healing powers attributed to the cave where local girl Bernadette spoke to the virgin Mary in 1858. Alone on this list, the fame of Lourdes does not indicate that you should visit - simply that it is famous!...

This roman aquaduct in Languedoc-Roussillon is an architectural masterpiece and one of the most impressive roman constructions still standing in France...

Discovered in the middle of the 20th century, these caves contain extraordinary fine examples of prehistoric cave painting. The caves being closed to the public need not deter you - there is a very high quality copy at Lascaux caves II next door...

Three million visitors a year can't be wrong - this is the most visited site in France outside Paris, and definitely one of the most famous places in France! The abbey on an island is an instantly recognisable landmark in Normandy on the northern coast of France...

These two theme parks are the most popular to be found in France...

At the end of the 19th century the world of art was changing forever, as the French impressionists explored new ways of painting and representing landscapes and scenery. Among these was Monet, and many of his most famous paintings are clearly recognisable scenes from these gardens - by far the most famous and most visited gardens in France

As well as the most famous sights in France above you will find lots more famous places at: