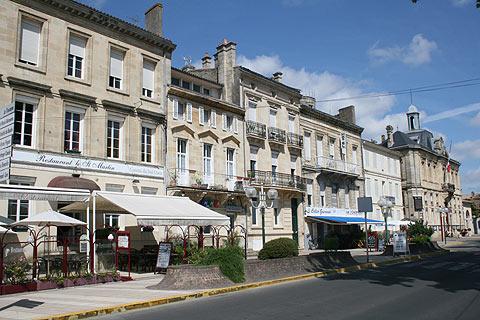 The Medoc region produces many of the finest wines in the world (Margaux, Pauillac, Chateau Lafite-Rothschild...), has more than 100 kilometres of fine sandy beaches, and is just north of one of the most vibrant cities in France.

It sounds like the perfect destination for wine buffs and beach lovers alike - but I wonder how many visitors to France could point to it on a map?

In case you have forgotten your French geography Medoc is is a peninsula about 100 kilometres long to the north of Bordeaux, with the Atlantic Coast to the west and the Gironde estuary. Very broadly Medoc can be seen as three different regions: 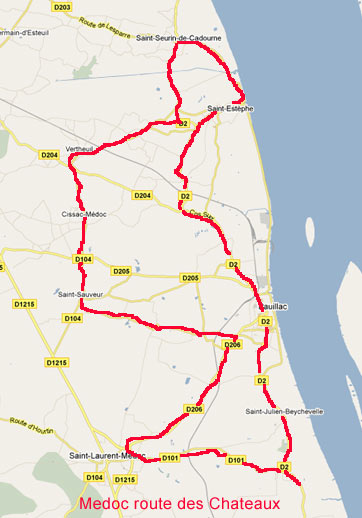 The eastern side of the peninsula is best known for its vineyards and wine chateaux, known together as the wines of Medoc(note 1). Among the most famous are Chateau Margaux, Chateau Latour, Petrus, Chateau Mouton-Rothschild (pictured), and Chateau Lafite-Rothschild - these are centred around the village of Margaux and the town of Pauillac

As you explore you also have the constant feeling that there are lots more chateaux hidden away just out of sight - many of the chateaux are only visible from the road when you suddenly get a tantalising glimpse of a turret above the trees or the corner of a castle visible at the end of a long tree-lined drive.

The small village of Margaux is a good place to start your visit - the information office is very helpful and has lots of information about all the visiting hours and guided tours in the region. several other Maisons de Vin are found elsewhere on the Medoc(note 2).

Margaux also represents the southern end of the so-called 'Route des Chateaux' - the D2 route that follows up the eastern coast of the Medoc as far as Saint-Vivien and passes many of the most important vineyards.

The Pauillac tourist office suggest a route that passes many of the most architecturally interesting wine chateaux around the town (about 50km so a couple of hours in the car or a nice afternoon on a bike). I have shown a sketch of the route (left) in case the tourist office is closed, otherwise pop in and get the more detailed map that also tells you the names of the chateaux etc.

Not the main reason to visit the Medoc perhaps but there are a couple of highlights to discover - for example, in the east of the Medoc, take a little time off from wine tasting to visit the picturesque little village of Vertheuil with its abbey, and to explore the small fishing ports along the Gironde estuary such as Talais and Valeyrac. A couple of the other towns towards the north of the Medoc include Lesparre-Medoc and Saint-Vivien-de-Médoc (with an 'unusual' church).

Forests cover a great deal of the centre and western parts of the Medoc region, many planted during the 19th century when the region was reclaimed from the inhospitable swamps and the mosquitoes that were found here before that time. They form the northern part of the largest forest in France - the Forest of the Landes - which runs almost down to the Spanish frontier.

Of course, cycling and hiking are popular in the forests - try a walk through the Reserve Naturelle de l'Etang de Cousseau (inland from Lacanau) for a good introduction to the environment. there is also a cycle path that runs the whole legth of the western Medoc peninsula (mmore than 100km) with others linking the resorts to the nearby towns, and another that runs cross-country and connects Lacanau with Bordeaux. 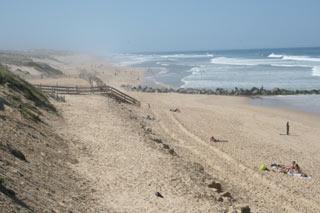 Wine and forests are all very interesting, but neither will amuse the children for long...and most tourists are families attracted to Medoc by the extensive sandy beaches fronting the Atlantic Ocean. Especially popular with surfers, there are several resorts along the coast. Among the most popular:

(1) the town of Soulac-sur-Mer towards the north of the Medoc peninsula, very pleasant and with an interesting 12th century basilica to visit if you can drag the children away from the beach for half an hour

(2) Lacanau Ocean is the most developed of the resorts on the coast, and is a bustling resort for much of the year - based of course around its exceptional beach

As well as the many impressive long and sandy beaches, especially well known for their surfing, their are also two very large lakes: one of them is the Lac d'Hourtin-Carcans, the largest lake in France. The lakes are important not just for their leisure facilities but also because they also have sandy beaches, but without the large waves that can be found on the Atlantic facing beaches

Is the Medoc right for you? 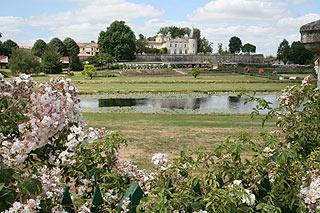 So should you visit? Of course it depends what you are looking for! People travel from far and wide for the chance to tour some of the greatest wine chateaux in the world. Other people enjoy nothing more than a holiday on a great beach. Still others like the chance to include some walking, cycling, golf in their trips...and if you fit in these categories then the Medoc could well be exactly what you are looking for.

If all this sounds too good to be true, I should just make a couple of comments before you book your travel. (1) The forests and lakes are picturesque but generally speaking the Medoc scenery is not especially exciting, and (2) most of the towns, villages and resorts on the Medoc pensinsula are functional rather than interesting, even those to the east that are surrounded by exclusive and very wealthy looking wine chateaux don't seem to have had much benefit from the riches of the area.

Tempted? Medoc is easily accessible from Bordeaux, with both the vineyards to the east and the resorts such as Lacanau to the west being within an hour or so of Bordeaux airport. Make a long weekend of it then come back and tell us how it went!

Map of the Medoc region