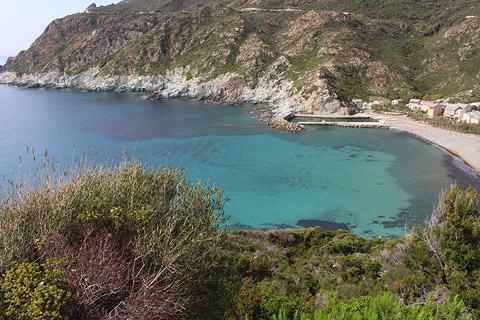 The peninsula at the northern end of Corsica, with the towns of Bastia and Saint-Florent at its base, is called Cap Corse. A driving tour of Cap Corse is a very popular excursion with visitors and there is an interesting variety of scenery, villages, ports and beaches to see.

Almost all visitors tour Cap Corse in an anti-clockwise direction, starting from near Bastia and travelling around to finish near Saint-Florent. They follow this direction because the sun rises in the east and sets in the west so the coastal scenery is at its best to the east in the morning and to the west by evening.

Driving around Cap Corse: One day or two days?

Although some visitors allow longer, it is very possible to tour Cap Corse in one day - but it will be quite a long day! If you are planning to tour the peninsula in just one day this will not realistically allow time to also explore Bastia and Saint-Florent on the same day, and will allow time to stroll along one or two beaches but doesn't include time to spend the afternoon on the beach or a long time in a restaurant at lunchtime. 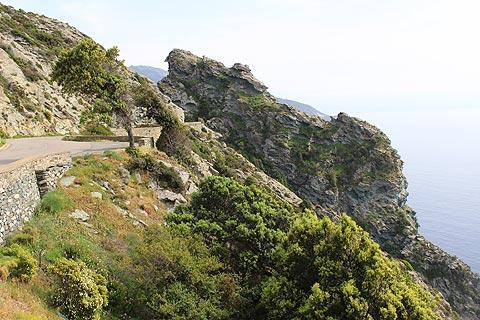 The road that tours Cap Corse is about 125 kilometres long, but that does not include the side trips to the places that give Cap Corse a lot of its charm. You will more likely end up driving closer to 175 kilometres, and a lot of it on quite slow roads.

If that sounds like too much time in the car and you prefer to spend two days touring then you will have more time for beaches, coastal walks and restaurants! Of course, if you do this you will also need accommodation for one night, which is quite limited in the north of Cap Corse. We noticed a nicely situated hotel in Rogliano which might be suitable (note that we did not stay in the hotel so it is just a suggestion based on its location not our personal experience).

Note that while it is lovely to tour Cap Corse, there is not actually a great deal to do here and most visitors would not actually stay here more than two days.

Of course, much of the appeal of Cap Corse is the scenery and this is more enjoyable if you can leave your car behind occasionally and walk along a beach or a coast footpath. We have suggested various possibilities in the individual travel guides below.

We start the tour at Bastia. The citadel and the old port are the highlights here, in one of the oldest and largest towns in Corsica. See Bastia guide.

Travelling north from Bastia you have a few kilometres which is rather too over-developed to enjoy, but then a little further and you reach Erbalunga. This small village and port is very traditional and unspoiled. See Erbalunga guide. 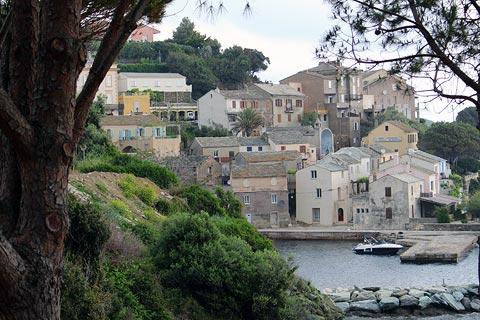 You next pass the small marina at Pietracorbara and carry on to Porticciolo. Even smaller than Erbalunga it will only take you a few minutes to have a stroll around the harbour.

The next stop is Macinaggio, not far from the northern tip of Cap Corse. It is in and around this most northern 15 kilometres of Cap Corse that many of the highlights are to be found.

Macinaggio is a small town with a port and a few cafes and shops, but is better known as the start point of the coastal path that follows around the north, passing various beaches and carrying on passed Barcaggio, one of our favourite beaches on Corsica.

It is also at Macinaggio where the road turns west to cross the Cap Corse peninsula, and allows you to reach Barcaggio by road, as well as the small port of Tollare and the hillside village of Rogliano. All these places are worth visiting: see our guide to north Cap Corse for details.

Now on the west coast, another highlight in north Cap Corse is the port at Centuri. Very unspoiled and very traditional, this picturesque port and village involves a detour of about 10 kilometres but is well worth it. It is also one of the few places in the north of Cap Corse to have a selection of restaurants. See the Centuri guide. 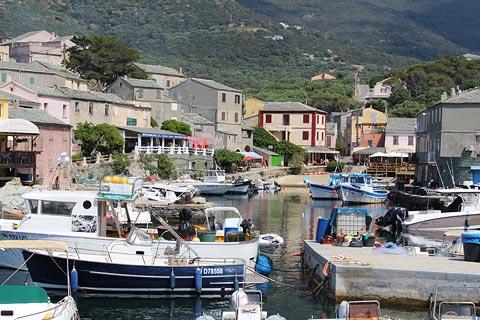 You can now travel south along the west coast. It is the scenery that is still the main attraction: on the east coast the road is usually quite near sea level but on the west it is usually higher, with cliffs and mountains and paths descending to the coast.

Next you can stop for a stroll around Pino and a walk down to the coast to see the tiny marina and chapel.

Further south most of the coast is very picturesque but you also have to pass an old asbestos mine which has been closed more than 50 years but is still spoiling the landscape. It is also due to the asbestos mine that the beaches here are typically a rather dark grey. An unusual sight but not very tempting compared to the beautiful white sandy beaches you will see elsewhere in Corsica. 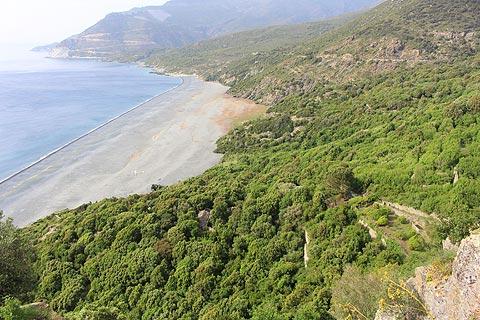 From here you will soon reach Nonza, a village high on a cliff above the sea with a prominent watchtower. See Nonza guide.

About 10 kilometres beyond Nonza you can turn east towards Bastia and pass through the village of Patrimonio. There is not a lot to see here but there is a lovely church on the edge of the vllage and Patrimonio is also known as one of the most important wine centres in Corsica.

Alternatively you can continue south to reach Saint-Florent, which is only a small town but has a busy harbour and a lively town centre and is also very pretty. See Saint-Florent guide.