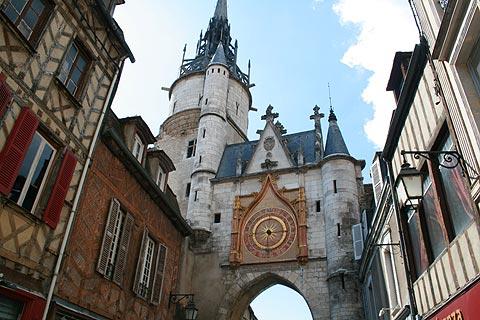 With the castles at Tanlay and Ancy-le-Franc and the important abbeys at Vezelay and Pontigny the Yonne is rich in historical monuments - but don't forget to allow time to visit some of the very attractive towns and villages here such as Noyers and Avallon, and to try some famous wine in the Chablis vineyards

Yonne occupies the north-western part of Burgundy, and includes many of the most important highlights of the region. The town of Auxerre is the capital of the department.

The landscape of the Yonne is one of hedgerows and small fields, of vineyards and forests, and small scale agriculture on the undulating landscape. There are numerous rivers and small lakes that enhance the landscape and also provide opportunities for swimming, fishing etc.

To help with your planning we have considered the department in two sections: the north and centre around Auxerre, and the south around Vezelay and Noyers-sur-Serein:

To the far north of the department the town of Sens is best known for its 12th century gothic cathedral, and has a pleasant small historic centre to explore with some half-timbered houses.

To the south of Sens, Joigny also has several interesting historical monuments and is in an attractive riverside location.

You are now close to Auxerre, the important town on the Yonne river which is best known for its cathedral and churches and also has an impressive historic centre to explore, centred around the 15th century clocktower.

Although less well known than the more famous abbeys in the region at at Fontenay and Vezelay, Pontigny Abbey is in the centre of Yonne and a very impressive building not to be missed to the east of Auxerre.

Wine enthusiasts will also want to visit the pretty town of Chablis, best known of course as a region that produces some of the finest wines in France and a short distance to the south of Pontigny.

Continuing eastwards, the castles at Ancy-le-Franc and Tanlay castle are among the most important castles in the department, and both quite close together to the south-east of Tonnerre on the Burgundy Canal (Canal de Bourgogne).

In Tonnerre itself the most interesting highlight is the ancient water source called the Fosse Dionne.

In the southern part of the Yonne department, the village at Noyers is one of the most attractive small towns in the whole of Burgundy, with a lovely medieval centre to explore.

South of Noyers-sur-Serein we enjoyed a visit to the the town of Avallon is among the most interesting towns to visit, and nearby we discovered the small fortified village of Montréal (8 km east of Avallon) which only took about an hour to stroll around but was very pleasant.

Every visitor who comes to Yonne visits Vezelay, which is classified as a 'most beautiful village of France' and also home to Vezelay Abbey, listed by UNESCO as a world heritage site. Vezelay village is little more than one long street that continues up the hill to the abbey and was rather crowded when we visited, so you might like to arrive in the morning!

After visiting Vezelay you can enjoy a stroll around Clamecy, a short distance to the west (in the Nievre department). North of Vezelay we suggest a visit to the pretty village of Arcy-sur-Cure and its ruined castle, before heading underground into the reputed caves here, which contain some of the oldest cave paintings in France.

Other places of interest close to here include the remains of the thermal baths and the gothic church at Saint-Pere, and the chateau and gardens at Saint-Fargeau - ideally visited in the summer when they hold special 'summer evening spectacles' for visitors

Continuing towards the west the town of Toucy has some interesting medieval houses to admire, and also some grander buildings from the 17th-19th centuries.

In south-west Yonne you can visit one of the most unusual, and most interesting, attractions in Yonne. This is at Guedelon where an entire medieval castle is being newly constructed using only authentic medieval materials and techniques.

Literary enthusiasts will also want to visit nearby Saint-Sauveur-en-Puisaye to see the house where Colette, the famous French author, was born and to visit the museum dedicated to her in the castle in the town.

The southern part of the Yonne (to the south of Avallon and Vezelay) is within the Regional Natural Park of Morvan, and a chance to enjoy some of the most attractive of the unspoiled Burgundy countryside (most of the parc is within the Nievre department).

Map of Yonne and places nearby