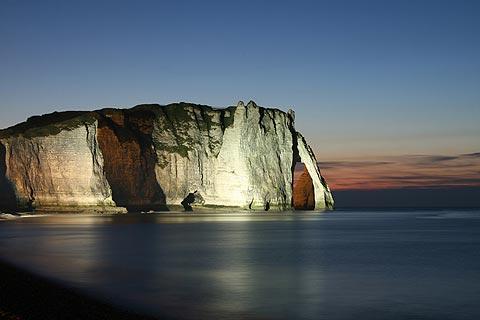 A fascinating mix of scenic splendours such as the cliffs around Etretat, coastal resorts and historic towns such as Rouen, the Seine-Maritime department of Normandy is also very accessible and home to numerous historic monuments and gardens of interest.

Seine-Maritime is the more northerly of the two French departments in the 'Upper Normandy' region (the other, to the south of here, is the Eure department).

The Seine-Maritime department attracts visitors for both its coastal region, from Le Havre to the south-west and passing through all the resorts of the Alabaster Coast as you travel towards the north-east, and for the countryside and historical towns and monuments further inland.

To help you plan your visit we have divided our guide into these two 'regions', although of course your visit is likely to include parts of both!

Following the coast of the English Channel from south-west to north-east, the principal resorts and coastal towns here are Le Havre, Fécamp, Dieppe and Le Treport.

This region of Seine-Maritime, including the coast and the western half of the department, is called the Pays de Caux after a celtic tribe who occupied the area 2100 years ago.

The most visited part of the coast is in the region of Etretat and nearby Fecamp, and is popularly known as the Alabaster Coast. The scenery here is exceptional, with the cliff formations around Etretat forming the dramatic highlight - but be sure to also find time to explore the towns themselves.

A quieter seaside town with a harbour for pleasure boats can be seen at Saint-Valery-en-Caux (north-east of Fecamp), while Varengeville-sur-Mer is on the coast close to Dieppe and also has access to a beach backed by the white cliffs of the region.

While at Varengeville-sur-Mer garden enthusiasts should visit the extensive gardens of the 'Bois des Moutiers', a mixed garden covering about 30 acres and listed as both a 'jardin remarquable' and a 'historic monument'.

There are other coastal resorts along the Seine-Maritime coast, often with popular beaches. The most visited of these resorts include Criel-sur-Mer (in an attractive setting with white cliffs either side of the beach), Les Petites-Dalles and Les Grandes-Dalles, Saint-Valery-en-Caux, Veulettes-sur-Mer and Yport. Note that most are pebble beaches, although the size of the pebbles varies between the resorts.

We strongly suggest you find the time to visit the beautiful small resort village of Veules-les-Roses near Saint-Valery-en-Caux, to see the watermills and houses along the course of the small river in the town.

The busy fishing port at Le Treport also has a beach and is close to the town of Eu and its castle.

Le Havre and Dieppe are commonly thought of as entry points to France and ignored as tourist destinations but as you pass through we suggest you find the time to explore a little, because both have their own particular appeal and interest for visitors.

Five towns in Seine-Maritime have been officially designated as 'towns of Art and History' including both Le Havre and Dieppe (the others are Elbeuf, Fecamp and Rouen).

Le Havre was largely rebuilt after the second world war and has a large number of concrete buildings - and is sufficently unique to have been listed as a UNESCO world heritage site. There is also a highly reputed museum of art (especially works by impressionist painters) in the town.

The port town of Dieppe has a beach and an old-town with some historic buildings of interest including a medieval castle, and merits to be explored.

Close to the town you can see the imposing ruined medieval castle at Arques-la-Bataille, and the 16th century Chateau de Miromesnil which also has impressive gardens, officially classified as a 'remarkable garden' in France (at Tourville-sur-Arques to the south-east of Dieppe).

Abbeys and Historic Monuments in Seine-Maritime

There are several important abbeys in the south-west Seine-Maritime, which are brought together as a proposed tourist route called the 'Route des abbayes' which connects the coast at Le Havre with the historic town of Rouen.

It is not just the coastal part of the Seine-Maritime department that attracts visitors, and there is a great deal to discover elsewhere in the department including the very impressive town of Rouen and other towns, castles and gardens of interest.

Despite very severe war time damage, great efforts in rebuilding the historical centre of Rouen (towards the south of Seine-Maritime) mean there is now a great deal of interest to see, including the cathedral and numerous medieval half-timbered houses, and it is one of our favourite towns in northern France.

Also in the south of the department along the valley of the Seine River we suggest you visit La Bouille, which has a pleasant riverside location, and Jumieges, which is best known for Jumieges Abbey.

The gardens along the riverside at Caudebec-en-Caux, which also has an impressive church, are also a pretty sight in the late spring.

North-east of Rouen the small villages of Ry and Clères both have attractive traditional village centres, while further east the Pays de Bray to the north of Saint-Saens is a peaceful area of woodlands and rolling hills that naturalists will enjoy exploring.

On the eastern border of the department the town of Aumale is pleasant to explore, with the Church of Saint-Paul and Saint-Peter, the remains of an abbey and several medieval houses to be seen.

Visitors seeking to enjoy the natural environment will enjoy spending time exploring the countryside of the Regional Natural Park of the Boucles de la Seine Normande (originally called the Brotonne Regional Natural Parc) in the south of the department between Rouen and Le Havre.

The landscapes within the park are very varied include large areas of forest and also more open countryside and areas of marshland, small streams and hedgerows, and there are plenty of opportunities to follow trails through the park to better appreciate the region.

There is also a notable castle at Saint-Maurice d'Etelan in the heart of the park. The 15th century Chateau d'Etelan is in the so-called 'gothic flamboyant' style, and features alternating rows of red bricks and white stone with ornate window surrounds.

Leisure and activities: There are numerous other attractions and activities available to visitors to Seine-Maritime, in particular along the coast and towards the west of the department. These include marked cycling and walking trails, amusement parks and mini-golf, paddling lakes and treetop-adventure parks.

Tradition and history: Of course you will also find traditional local French markets, parks and gardens to explore, and small local museums which often contain artefacts of interest. Be sure to visit the tourist information close to where you are staying to find out about events and activitities available nearby.

Map of Seine-Maritime and places nearby

See an index of all Seine-Maritime communes.