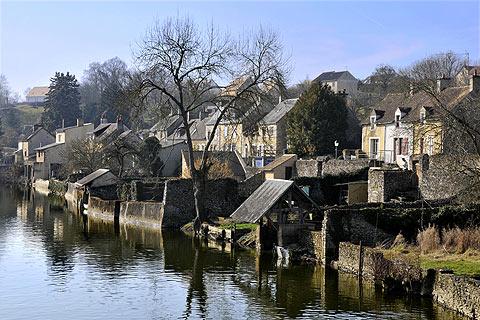 While Sarthe is not the most visited department in France, there is much of interest to visitors including the medieval centre of Le Mans, historic towns and some lovely countryside

The most easterly department in the Pays-de-la-Loire region (so on the border with the Centre or Loire Valley region), Sarthe is easily accessible from both Paris and from the ferry ports along the channel in north-west France.

One destination in the department that is famous worldwide is Le Mans, best known for its 24 hour road race. Le Mans also has quite an extensive medieval old town and an important cathedral and a visit is highly recommended even when the race is not on!

Le Mans is also the capital town of the department.

But there is more to Sarthe than Le Mans, and the department has an interesting selection of towns and villages, countryside and monuments, to be explored - preferably at a leisurely pace in late spring or early autumn, and ideally including a boat trip along the Sarthe river.

Not far from Le Mans there is a small theme park called Papéa Parc with a focus on rides for younger children.

The only castle that would be considered as being one of the 'Loire Valley Chateaux' in Sarthe is the Chateau du Lude to the south of the department and situated on the Loir river in scenic surroundings.

Also to the south-west there is a popular zoo at La Fleche which is the most popular tourist attraction in the department.

To the north of Sarthe it is the natural environment that attracts the most visitors, with the scenery of the Alpes Mancelles (very scenic although the word Alps might evoke something rather more mountainous than the gentle hills of this region), the Forest of Perseigne, the Regional Natural Park of Normandie-Maine and a small part of the Le Perche region being among the places popular with walkers and cyclists.

The most interesting towns and villages here in the north include La Ferte-Bernard, near the eastern border of Sarthe, and the towns of Beaumont-sur-Sarthe and Fresnay-sur-Sarthe. Each of these towns is small but has an interesting old town which is a pleasure to explore and pretty views along the river. Sillé-le-Guillaume also has a couple of interesting sites.

Also in the west of the department we recommend you visit Asnieres-sur-Vegre which is a pretty riverside village, and nearby the abbey at Solesmes is an imposing Benedictine monastery overlooking the Sarthe river where you can hear some of the best gregorian chant in Europe. A short distance north of Asnieres we also enjoyed a stroll around Brulon.

Parcé-sur-Sarthe is a 'small city of character' and has an attractive mill on the edge of the river. We also suggest you explore the small town of Malicorne, best known for its assocition with pottery.

Towards the east visit the town of Saint-Calais, best known for its medieval church and officially listed as a 'small city of character'.

From here you can also visit the Chateau de Courtanvaux at Besse-sur-Braye, a substantial castle in a wooded valley with attractive gardens and some beautifuly decorated rooms.

Map of Sarthe and places nearby