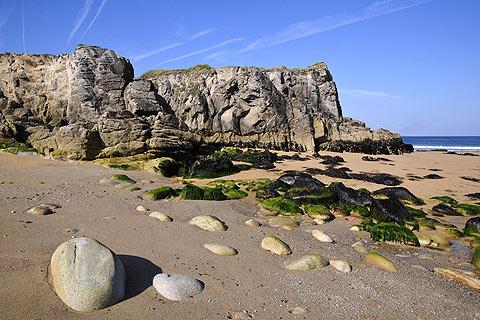 Morbihan is surely one of the most varied departments in France, with prehistoric monuments and important historical towns and castles standing in contrast to the ever popular ports and villages, beaches and islands along the coast and around the Gulf of Morbihan. This region of southern Brittany is definitely a department with something for everyone...

The Morbihan department is in the southern part of Brittany, based along the coast around Vannes, and including the Carnac megaliths, several very popular islands and attractive stretches of coast and the Morbihan Gulf.

The region around Carnac and the numerous prehistoric standing stones here are undoubtedly the best known attraction in Morbihan - there are a great deal of these standing stones and megaliths, dolmen and menhirs, dating back to neolithic times.

Carnac is the 'prehistoric centre' of France for these stone structures, with literally hundreds to explore - see Carnac prehistoric sites for information. There are further important prehistoric structures at nearby Locmariaquer that should also feature on your list of places to visit.

Unfortunately the number of tourists visiting these stones threatens to damage them so access is now quite restricted, especially during summer months, which slightly diminishes their power to enthrall. But don't worry, the effect of seeing the stones from the paths along the edge is still quite magical and mysterious.

The popular resorts of Carnac Plage and La Trinite-sur-Mer are on the coast just south of Carnac and have all the beach facilities you could hope for, but not surprisingly are also rather more crowded than some of the smaller coves and villages.

Along the Morbihan coast there are numerous small sandy beaches to explore - but you should be aware that some of them have very strong undercurrents, so you should only swim where you know it to be safe.

From Carnac you can also continue on to the Quiberon Peninsula to visit Quiberon, and also for ferries to the largest of the islands off the Brittany coast at Belle-Ile-en-Mer and the much smaller island of Ile Houat.

The Morbihan Gulf to the east of Carnac has numerous small islands and opportunities to explore nature including trips to the islands of Ile-d'Arz and the Ile-aux-Moines.

On the Rhuys peninsula to the south of Morbihan gulf you can visit Sarzeau, also perhaps pausing to admire the church at Saint-Gildas-de-Rhuys, then continue to reach Arzon and the twin ports of Port de Crouesty and Port Navalo.

Other sights of interest in Morbihan

The most popular destinations in Morbihan are along its southern coastline, although there is also quiet countryside and historic towns and villages to discover a little way inland.

Moving west to east through Morbihan, start perhaps with a visit to the fishing port at Lorient. A short distance north of Lorient we suggest a trip to explore the villages at Lanvaudan and Pont Scorff.

East of here visit Auray - and in particular its very picturesque port area called Saint-Goustan - and the pilgrimage site at Sainte-Anne d'Auray a little to the north of Auray.

Just south of here you are in for a treat when you visit the town of Vannes with its lovely historic centre which is the 'capital' of the department and one of our favourite towns in Brittany - perhaps in France.

Be sure to allow some time to explore the parts of Morbihan that are not along the coast. Among the highlights we suggest you visit the town at Pontivy, with a history dating to medieval times but with substantial additions in the Napoleonic era.

North of Pontivy the Guerledan Lake is a lovely place to visit with walks around the edge of the lake or boat trips on the lake both recommended. South-east of here don't miss Josselin Castle.

North-east of Josselin you can explore the Broceliande Forest, the oldest forest in Brittany and the source of many legends relating to Merlin and the Knights of the Round Table.

South of Josselin the most picturesque villages include Malestroit and Lizio.

Further south-east in the department we recommend you spend some time exploring the town of Rochefort-en-Terre before continuing on to discover La Roche-Bernard. Close to La Roche-Bernard you will also enjoy a stroll through the small village of Le Guerno.

Map of Morbihan and places nearby