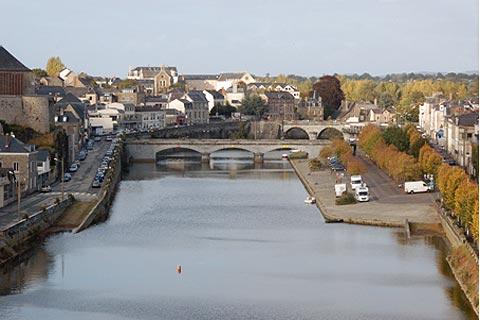 The Mayenne department loses out in tourist numbers to its more famous neighbours - Brittany, Normandy and the Loire valley - giving more intrepid visitors a chance to enjoy French towns, history and countryside in peace and tranquility!

The Mayenne department is located in northern France, in the Pays-de-la-Loire region with Normandy to the north, Brittany to the west and the Loire Valley to the south.

Although the department has less major attractions than some of these more visited regions  there are some interesting towns and attractions here in Mayenne that merit to be explored, so even if you are not passing your entire visit to France here you might like to plan a detour of a day or two...

For the purposes of planning a visit it is useful to consider Mayenne as two regions: north of Laval, which has many of the places of interest and the quieter area to the south of Laval.

One of the largest towns in the north of the department is also called Mayenne and is built on the banks of the river that also has the same name! The town is pleasant to explore, with a castle and basilica and picturesque riverside walks.

Among the most interesting towns to visit in the north of the Mayenne department are Evron, with the Abbey-church of Notre Dame l'Epine, and the historical town centre with the castle and cathedral at Laval.

The medieval village of Lassay-les-Chateaux to the north-east of Mayenne also has a castle and several interesting historic monuments and is a pleasure to explore, towards the border with Normandy.

A short distance north-west of Evron at Mézangers the Chateau du Rocher is a substantial castle dating from the 13th-16th centuries that includes a renaissance facade and an arcaded gallery. Also here at Mezangers you can relax at the Etang du Gué de Selle, a large leisure lake.

One of the most interesting historic sites in the department is the Roman site of Jublains, a short distance south-east of Mayenne and with the remains of the Roman theatre, fortress and temple clearly visible. There is also a museum that presents Roman artefacts from the site.

Towards the east of the department the picturesque village of Sainte-Suzanne still retains part of its medieval defences and castle and is classified as one of the 'most beautiful villages in France'.

The region of north-east Mayenne known as the 'Coëvrons-Mayenne region of art and history' includes the destinations suggested above and also many of the natural attractions of the department such as the Erve River, the Coevron hills and the Charnie forest, and several other small churches and villages.

North-west of Mayenne the Jardins des Renaudies at Colombiers-du-Plessis are one of the most popular gardens open to the public in Mayenne. Mostly planted in the English style the gardens are quite extensive and very pleasant to explore with a very wide range of planting arrangements.

To the south-east of Mayenne and south of the village of Sainte-Suzanne you can visit the small town of Saulges, listed as a 'little city of character'. Close by we also suggest you take a stroll around the small villages of Saint-Pierre-sur-Erve and Chémeré-le-Roi.

One of the most popular tourist attractions in the department is the cave system in a picturesque setting just outside Saulges with two separate caves to explore by guided tour and various other facilities including a cafe.

Further south you can explore the town of Chateau-Gontier, one of the largest in the department and with an attractive historic centre mostly dating from the 17th - 19th centuries and a riverside setting.

Close to Chateau-Gontier you can visit the Refuge de l'Arche, the most popular attraction in Mayenne. This animal refuge cares for wild and domestic animals that have been mistreated, injured or seized by the police. After being treated the animals are either kept on site or released to new homes or into the wild.

In the south-east corner of the department the small town of Saint-Denis d'Anjou has preserved its 16th century market hall and other houses from this period and it was very pleasant to explore, especially in early summer when the streets are filled wth flowers.

Another popular visitor attraction, this time in south-west Mayenne at Cossé-le-Vivien, is the Robert-Tatin Museum. Between 1962 and 1983 the artist Robert Tatin made numerous monumental sculptures of historic figures and famous artists and these are now on display at the the artists house which became a museum after his death. Very unusual and interesting.

Many visitors are drawn to the quiet waters of the Mayenne River here in the south of the department either by taking a boat trip along the river itself or by following the towpath alongside (typically on foot or bike), both options offering a chance to appreciate the scenic attractions of the department.

There are several towns in the Mayenne department that have been classified as 'little cities of character'. Saulges and Saint-Suzanne are the most visited, while others with this classification include Chailland, Lassay-les-Chateaux, Parné-sur-Roc, Saint-Dennis d'Anjou and Saint-Pierre-sur-Erve.

Map of Mayenne and places nearby

See an index of all Mayenne communes