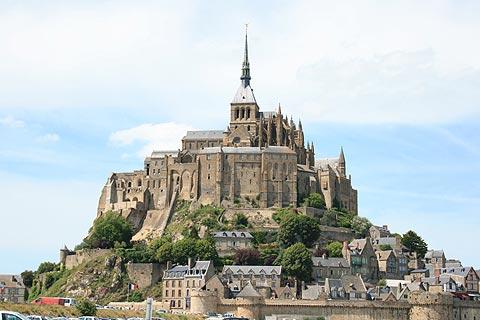 The Manche department of Normandy is best known as being home to the famous island and monastery of Mont-Saint-Michel, but be sure to allow time to explore the coast and countryside elsewhere on the Cotentin peninsula, and the sites of the first Normandy D-Day landings

The Manche department is in north-west Normandy (northern France) on the Cotentin Peninsula which extends into the English Channel, with Cherbourg at the northern end and Saint-Lô as departmental capital.

The department takes its name from the English Channel, called La Manche in France. Manche is the French word for sleeve, which the English channel is said to resemble.

Because the ferry port town of Cherbourg is at the north of the peninsula many visitors pass through the Manche, but rather less take the time to explore - we suggest you slow down, there are some highlights along the way!

If you spend some time here you will find sandy beaches, in particular in the resorts along the western coast, great scenery both along the coast and inland, and a quiet rural backdrop that combines woodlands and open fields, marshlands and coastal clifftop walks - all play their part in shaping the appeal of the Manche department.

First take a look around Cherbourg itself, an interesting town that has some historical monuments (mostly reconstructed after damage in the second World War) and to visit the Cité de la Mer, a large aquarium complex where you can also visit the nuclear submarine 'La Redoutable' - this is one of the most popular tourist attractions in Normandy.

The far north-west of the Cotentin peninsula, called the Cap de la Hague, is an impressive section of coast with cliffs and natural rock bays - see the views from the Nez de Jobourg and the Nez de Voidries in particular.

From here it is only a short distance to the north-east corner of the Cotentin peninsula to visit the pretty village of Barfleur, classified as one of the 'most beautiful villages in France'.

On the eastern coast there are two destinations that are unmissable to those interested in the Normandy D-Day landings:

Note: Utah beach is the most westerly of the landing beaches which are a very popular destination for visitors - see landing beaches for details of the others and other commemoritave sites in the region.

Another town of interest here in the northern Manche is Valognes, which has several interesting historical buildings and is listed as a 'town of art and history'.

On the western coast you can visit the resort at Barneville-Carteret (notable for me because it was the first place I ever visited in France, more than 30 years ago...) and also the abbey church at Lessay, an impressive example of romanesque architecture.

At Canville-la-Rocque to the north of Carteret the village church has some 16th century frescoes that were uncovered during renovation work 20 years ago.

In the southern half of the Manche you can visit the town of Coutances and visit the very impressive Cathedral of Notre Dame, and explore the roman style abbey church of Lessay. East of here the the zoo at Champrepus (near Saint-Lô) is also popular with visitors.

A little further south and you reach the resort of Granville. Take a stroll along the beach looking out across the bay before continuing the short distance around the coast to visit the island and abbey at Mont-Saint-Michel. This historical pilgrimage centre on the border with Brittany is a very beautiful site and one of the most popular tourist destinations in France.

Rather overlooked because of its famous neighbour, there is a second much more modest abbey at La Lucerne which is also interesting to visit.

A short distance east of Mont-Saint-Michel the town of Avranches is also pleasant to explore and contains several historical monuments including a medieval castle. Further east, Mortain has a 12th century abbey church with cloisters, and also a scenic waterfall called the Grand cascade.

Given the enormous amount of damage suffered by the region during the 1944 invasion of northern France it is incredible that any important historical monuments are still standing, but they are (often with considerable renovations since the war) and there are several of note to visit in the Manche.

The abbeys at Hambye and Lucerne and Coutances cathedral are the most important religious monuments, although there are many smaller churches and chapels to discover in Manche.

There are also castles of interest across the Manche such as those at Baudreville, Bricquebec, Cerisy-la-Salle, Crosville-sur-Douve, Gratot, Nacqueville, Parigny, Pirou, Regneville, Saint-Sauveur Lendelin, Vergoncey and others - often these castles are 'fine manor houses' rather than grand castles, but each has its own appeal and interest.

Map of Manche and places nearby

See an index of all Manche communes.