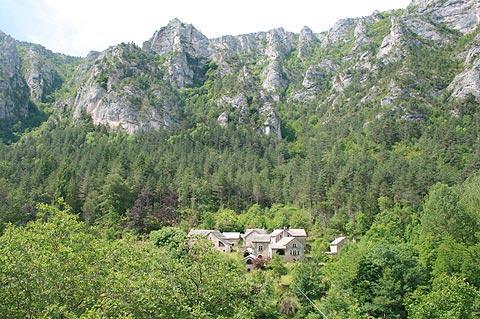 The Lozere department of northern Languedoc-Roussillon is best known for its dramatic and unspoiled scenery such as the Gorges du Tarn, one of France's most impressive natural highlights, and the numerous pretty villages to explore in the scenic surroundings.

The Lozere department is the most northern part of the Languedoc-Roussillon region of southern France, and forms part of the Massif Central mountain range.

The department has quite different characteristics in the north, which is typically a region of gently rolling hills with open moorland and woodlands, and the area to the south of Mont Lozere, which is a dramatic landscape of deep gorges and steep forest covered hills.

It is the southern half of Lozere which is most interesting to visitors, and is certainly one of our personal favourite regions in France.

For your convenience when planning a visit we have reviewed each region of the Lozere department separately:

The south of Lozere: gorges and villages

The most popular route to explore the south of the Lozere is to follow the route between Les Vignes and Pont-de-Montvert as it passes through the Gorges du Tarn.

Travelling from east to west, first take the time to explore Le Pont-de-Montvert itself, which is a picturesque small town on the edge of the Tarn river with several cafes and a perfect place to take a break.

A short distance west of here Florac is another attractive town which is a pleasure to explore.

Continuing west you now enter the Gorges du Tarn, the deepest gorges in Europe and an exceptional natural scenic highlight - certainly one of our favourite places in France. See Gorges du Tarn for details.

There are some very picturesque villages as you travel along the Gorges du Tarn, including Montbrun (at the entrance to the gorges) and Castelbouc.

Another highlight in the gorges is the village of Sainte-Enimie, built on the steep slope above the river and listed among the 'most beautiful villages in France'. A little further west we also recommend you visit the village of Saint-Chely-du-Tarn.

Of course, it is the Gorges du Tarn themselves that provide the principal attraction of this route!

Also here in southern Lozere, particular attractions include the curious rocks scattered across the landscape at the Chaos de Nimes-le-Vieux (between Florac and Meyrueis), while at Saint-Pierre-des-Tripiers you can visit the Vultures Belvedere to see the vultures in the animal park.

When the temperature outside is a bit high you can cool down with a visit to one of the popular cave systems, with the enormous cave system at Aven Armand and the extensive 'pink caves' at Dargilan (take the road south from Meyrueis).

There is further impressive scenery to explore around Mont Aigoual on the southern border with the Gard department, south-east of Meyrueis.

Between the north and south of the Lozere department you will pass Mont Lozere, an exposed mountain with very picturesque scenery and the highest summit in the Cevennes National Park.

The most interesting way to travel between the north and the south is to follow the road between Le Bleymard (north of Mont-Lozere) and Le Pont-de-Montvert (to the south).

Note the small stream that you cross in Le Bleymard is the Lot River, close to its source.

The road between the two towns passes close to the highest point of Mont Lozere, and a short footpath takes you to the summit. To the south of Mont Lozere you can see the fascinating prehistoric megaliths at La Cham des Bondons - with 154 menhirs the region is second only to Carnac in size of prehistoric sites in France.

The towns of Mende and Marvejols are both situated centrally in the department. Both are quiet regional towns, pleasant to explore and typical of those in the region. To the east of Mende there is a popular spa town at Bagnols-les-Bains.

West of Mende you can visit the fortified village at Villard and the small town of La Canourgue, made picturesque by the small canals and streams that pass through the centre of the town and with several interesting historic monuments to see.

To the far east of the department high on an isolated rocky plateau is the village of La-Garde-Guerin. Although it involves quite a long detour to get here, we do recommend you visit because it is a very interesting and unspoiled historic village and there are lovely views across the valley below.

On the approach to La Garde-Guerin from the south you will pass the large Lac de Villefort, which offers various leisure opportunities in summer months.

Travelling north from Marvejols, at Prinsuejols you can visit the Chateau de la Baume, a sturdy granite castle built in the 17th-18th centuries with an austere facade that conceals a richly decorated interior.

At Saint-Léger-de-Peyre to the north of Marvejols we suggest that you visit the wolf park at Gevaudan to see wolves living freely in a natural environment that extends over 20 hectares (50 acres).

North of here we also enjoyed exploring the quiet town of Aumont-Aubrac, which has several historic buildings of interest and is surrounded by attractive countryside.

There are various small villages of interest in this northern part of the Lozere that combine to make for a pleasant day out exploring including Arzenc, Apcher, Fournels and Le Malzieu.

Another popular destination in Lozere, this time to the far north of the department, is to see the bisons living in semi-liberty at the Reserve des Bisons at Saint-Eulalie-en-Margeride.

Map of Lozere and places nearby

See an index of all Lozere communes