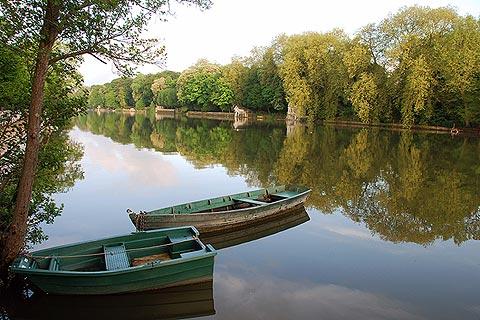 The Loiret department is forever associated with the history of Joan of Arc, and nowhere more so than in the impressive town of Orleans - but you will also find castles and gardens, villages and historic monuments in all parts of Loiret, so spend some time exploring!

The Loiret department of France is located to the south of Paris around the town of Orléans, in the Centre region of France. Although they are less well known than those further west along the Loire Valley, Loiret has several attractive castles that will form a highlight of your visit, along with some lovely parks and gardens, churches and picturesque villages.

Any visit to the Loiret will include time exploring Orleans itself. The cathedral is the main attraction, along with the city's close association with Joan of Arc. You can visit Joan of Arc's house, and enjoy the extensive medieval old centre in the city.

Our favourite garden, and the most visited attraction in the Loiret, is the Parc Floral de la Source. A short distance south of Orleans the park takes its name from La Source, a suburb of Orleans, which is in turn named after the source of the Loiret river, which is found in the park.

This extensive park-garden covers 35 hectares (80 acres) and includes a wide range of natural environments as well as numerous planted gardens, including those dedicated to irises and roses among others.

Also very popular with ramblers is the extensive Orleans Forest to the east of the city. To the south of the forest you will also enjoy visiting the park and arboretum that dominates the town of Chateauneuf-sur-Loire.

To the north-east of Orleans you should visit the village of Yevre-le-Chatel, classified among the most beautiful villages in France. Another great garden to visit in the Loiret department is the Arboretum-des-Grandes-Bruyeres, home to various national collections of trees and plants.

While in this region also explore the town of Montargis, criss-crossed by rivers and canals and with several places of interest to explore - as well as a large number of bridges!

Important castles in this part of the Loiret include those in a pretty location surrounded by a moat in Bellegarde and Chateau de Chamerolles at Chilleurs-aux-Bois.

Directly south of Orleans you can visit the castle at La Ferte-Saint-Aubin.

Close to La Ferte-Saint-Aubin, the managed parkland of the Domaine du Ciran at Menestreau-de-Villette is also very pleasant; the Domaine du Ciran is an extensive, largely forested, park where you can enjoy numerous marked trails and a chance to see deer and other wildlife in a natural environment.

The village at Vannes-sur-Cosson also deserves a visit to see the ancient colombage houses in the heart of the village.

In south-east Loiret another highlight is the Chateau of Sully-sur-Loire, the most important castle in the department and the most eastern of the castles that would be considered as 'Loire Valley castles'.

Not far from Sully-sur-Loire, the Abbey at Saint-Benoit-sur-Loire (also known as the Abbey de Fleury) is one of the most important religious monuments in Loiret, and we also recommend a visit to the lovely oratory at Germigny-des-Prés, a small but perfectly formed church dating in part from the 10th century and containing an impressive mosaic in the apse.

You should also visit Gien in this part of Loiret, which is in an attractive setting along the banks of the Loire river. Nearby, the Arboretum National des Barres brings together an extensive range of trees from all around the world, and a short stroll through the village at Saint-Brisson-sur-Loire is also enjoyable.

See the 16th century renaissance style Chateau de la Bussière, surrounded by gardens (classified as a 'remarkable garden') and a lake, then continue further south-east to find activities based along the river and canal at Briare where the Loire is crossed by a canal.

The link with Joan of Arc (Maid of Orléans) plays a important role in the history and the tourism of the Loiret department, including Beaugency, medieval town and site of an important battle to the south-west of the department.

Just north of Beaugency at Meung-sur-Loire you can see a castle and several other notable historical buildings. On the edge of Meung-sur-Loire is the Jardins-de-Roquelin, a pretty rose garden. After exploring Meung-sur-Loire we also suggest you visit the 16th century gothic style basilica at Clery-Saint-Andre, a short distance east of the town.

History and following in the footsteps of Joan of Arc

Several of Joan of Arc's important battles also took place in Loiret including the Siege of Orleans, and other towns also celebrate Joan's passage through the region including those at Chécy, Gien, Jargeau and Patay.

You will find it difficult to explore Loiret without learning the history of Joan of Arc and the Hundred Years War!

Map of Loiret and places nearby