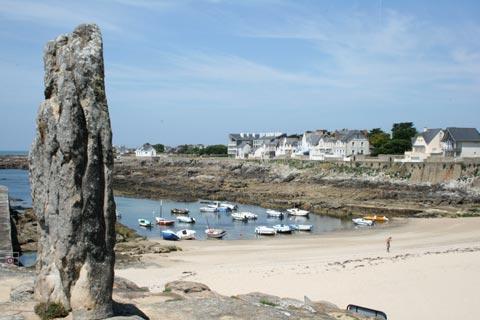 Facing the Atlantic Ocean in north-west France the Loire-Atlantique department is most visited for its coast that combines modern resorts such as La Baule with the chance to explore and enjoy quainter harbour towns such as Le Croisic, but be sure to also travel inland to explore the towns and natural highlights...

The Loire-Atlantique department is situated in north-west France, with the Atlantic coast to the south-west and along the lower reaches of the Loire River, which divides the department in two as it travels from Nantes to Saint-Nazaire. It is part of the Pays-de-la-Loire region of France, to the south of Brittany.

While most visits to Loire-Atlantique are based on or near the coast, it is inland that you will discover the most important historic towns and the natural environment of the department. We review the highlights of these two areas separately below:

The main attractions for tourists in Loire-Atlantique are centred along the coast to both the north and south of the Loire estuary, where you will find numerous small ports and resorts that are popular with French and overseas visitors alike.

The resorts along the Loire-Atlantique coast vary widely in 'sophistication' from the rather upmarket La Baule-Escoublac to a number of more budget focussed and camping dominated resorts.

By the time it reaches the coast at Saint-Nazaire the Loire River is more than two kilometres across. There is a modern bridge across the broad estuary between Saint-Nazaire to the north, which is a large industral port town, and Saint Brevin les Pins to the south, which is a seaside resort.

The coastal region to the north of the Loire estuary is called the Cote d'Amour, a strip of coast that historically was reputed for oyster production but is now better known as a tourist destination. It is along the Cote d'Amour that you will find the most popular resorts in the region.

Travelling along this coast you pass through several picturesque villages and harbour towns with highlights including Piriac-sur-Mer, the lively town of Le Croisic, an attractive traditional fishing port with numerous fish restaurants, and the village of Batz-sur-Mer.

The resort at La Baule has a fine sandy beach that is more than eight kilometres long and is backed by upmarket hotels, shops and cafes, and would probably be our preferred location if exploring this region.

Close to La Baule other resorts and towns include Pornichet, also well known for its extensive sandy beaches, and Le Pouliguen, while to the east you can explore the beach and small town at La Turballe, or continue to Piriac-sur-Mer and the picturesque coast at the Pointe du Castelli.

Although Saint-Nazaire is not itself a leading tourist destination it has a popular submarine base and an ecomuseum to visit.

The coast to the south of the Loire estuary is called the Jade Coast. Among the most popular towns and resorts in this region are Prefailles, Pornic with an attractive traditional harbour area and a pleasant walk along the coastal path from the town, and the family-friendly beaches in and around Saint Brevin les Pins. South-east of Pornic at Les Moutiers-en-Retz there is also a beach and an unusual 'Lantern des Mortes'.

The capital of the Loire-Atlantique department is the vibrant town of Nantes, which is one of the most bustling and enjoyable cities in France with a great deal to see and enjoy. See Nantes guide for details.

As well as exploring the city centre in Nantes the whole family will enjoy a visit to the Ile de Nantes in the centre of the town to see the Grand Elephant (a giant mechanical elephant that carries passengers) and the big machines based on the works of Jules Verne so allow plenty of time for your visit.

The Briere Natural Regional Parc covers a substantial area north-west of the Loire estuary. This is a region of marshes, canals and waterways, and the 'Grande Briere' is the second largest area of marshes in France (the Camargue region on the southern coast is larger).

There are numerous opportunities for walking and nature watching in this unusual and peaceful environment which is also well known for the local architecture, with many thatched cottages to be seen in the region, in particular at Kerhinet to the east of Guerande (around the visitor centre for the parc).

In the south-west of the Briere Natural Regional Parc a particular personal favourite is the walled town of Guerande, which is a lovely town to explore with lots of historic monuments, streets of ancient houses, and cafes to relax in.

If you are in the south-east of the Loire-Atlantique, one of our favourite small towns is Clisson which has the substantial remains of a medieval castle and several other historic monuments of interest.

Further east the village of La-Fresne-sur-Loire is a pleasant place to take a stroll along the river front, and Oudon has an attractive historic centre including an unusual octagonal tower.

The scenery is quite different towards the north of the Loire-Atlantique, where you will enjoy exploring the trails through the extensive forest called the 'Foret du Gavre'. Mostly of oak and pine trees, the forest is another chance to enjoy the birdlife of the department.

As well as the Loire river there are several other waterways that traverse the department, including the Sevre and Erdre rivers, part of the Nantes-Brest canal and many smaller canals. Each of these has its own charm and ensure there are lots of water based leisure options as you explore the department.

Canal boat holidays along the Nantes-Brest canal are a popular way to explore the inland parts of the department.

Map of Loire-Atlantique and places nearby

See an index of all Loire-Atlantique communes